Prime Minister Narendra Modi was on a-day-long visit to Maharashtra on December 24, 2016, where he laid the foundation stone of ‘Shiv Smarak’, the grand memorial of Maratha warrior king Chhatrapati Shivaji Maharaj in the Arabian Sea off Mumbai coast.

Features of the Shivaji Memorial

The Shivaji memorial is proposed to be build on around 15-hectare Island with as high as 192 metres tall statue of the iconic Maratha king. 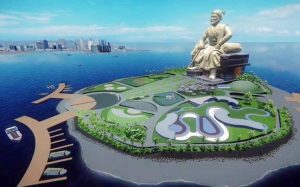 Shivaji Bhonsle, also known as Chhatrapati Shivaji Maharaj, was an Indian warrior king and a member of the Bhonsle Maratha clan. In 1674, he was formally crowned as the Chhatrapati (Monarch) of his realm at Raigad.

Later, the PM headed to Pune, where he laid the foundation stone of the Pune Metro Rail project at the Agriculture College ground. He was accompanied by the NCP leader Sharad Pawar.

During his visit to Mumbai, PM Modi laid the foundation stone of a new campus of SEBI’s National Institute of Securities Markets (NISM) at Patalganga in Mumbai.

NISM is an educational initiative of capital markets regulator SEBI. NISM presently operates from its campus in Vashi, Navi Mumbai, but the existing infrastructure is inadequate to meet its growing requirements.