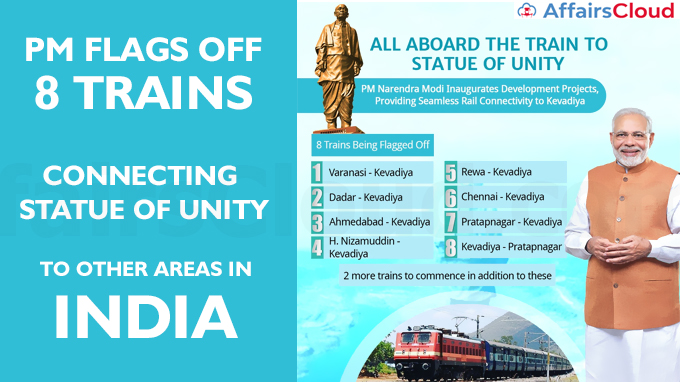 PM Modi stated that this is the 1st in the history of Railways that trains have been flagged off for the same destinations from different parts of the country.

i.The connectivity Project was sanctioned at a cost of INR 811 Crores.

iii.The Statue of Unity was inaugurated in October, 2018 by PM Modi on the occasion of Sardar Vallabhai Patel’s 143rd Birth Anniversary.

Points to be Noted –  Foundation stone for the construction of Statue of Unity was laid by Hon’ble Prime Minister Shri Narendra Modi on 31st October, 2013, as the then Chief Minister of Gujarat, on the occasion of the birth anniversary of Sardar Patel. The gigantic Statue of Unity standing tall at a towering height of 182 meters warmly opened its doors to the public on 31st October, 2018 on the occasion of the 143rd birth anniversary of Sardar Patel.

i.November 6, 2020 Prime Minister Narendra Modi paid a two-day visit to Gujarat from October 30-31, 2020. He inaugurated 17 projects around the Statue of Unity in Kevadia, Gujarat and laid the foundation stone for 4 new projects.