Pandit Deendayal Upadhyay was an Indian philosopher, economist, sociologist, historian, journalist, and political scientist. He was one of the most important leaders of the Bharatiya Jana Sangh, the forerunner of the present day Bharatiya Janata Party.

As part of efforts to spread the message of BJP ideologue Deen Dayal Upadhyay in his birth centenary year, Prime Minister Narendra Modi  launched a series of works dedicated to the philosophy of the former Jana Sangh chief. 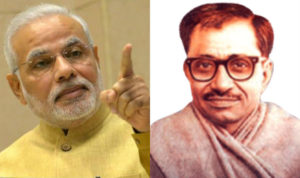