On April 16, 2017 Prime Minister Narendra Modi was in Bhubaneswar, Odisha. He felicitated the family members of 16 freedom fighters who were martyred during the Paika Rebellion. 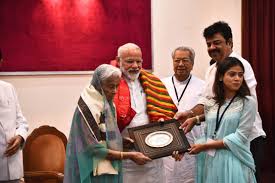 Paika Rebellion was an armed rebellion against British East India Company which took place in the year 1817 across Odisha. Combination of social-political-economic causes triggered the Paika rebellion. Paiks were the traditional warrior clan of Odisha.

Virtual Museums To Be Set Up In 50 Places

While felicitating the family members of freedom fighters in Bhubaneswar, PM Modi highlighted the vital role of tribal communities during India’s struggle for independence.

PM Modi was in Bhubaneswar on 15th and 16th April, 2017 to attend the Bharatiya Janata Party’s (BJP) two-day national executive meeting. He also visited and offered prayers at the famous 11th century Lingaraj Temple in Bhubaneswar.

Paika Bidroha to be named as 1st War of Independence