On October 23, 2017, Union HRD Minister Prakash Javadekar mentioned that from the next academic session, ‘Paika Bidroha’ (Paika rebellion) of 1817 will included in history text books as ‘the First War of Independence’.

Paika Rebellion was an armed rebellion against British East India Company, which broke out in the year 1817 across Odisha. Combination of social-political-economic causes triggered the Paika rebellion. 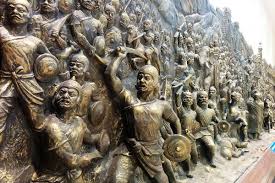