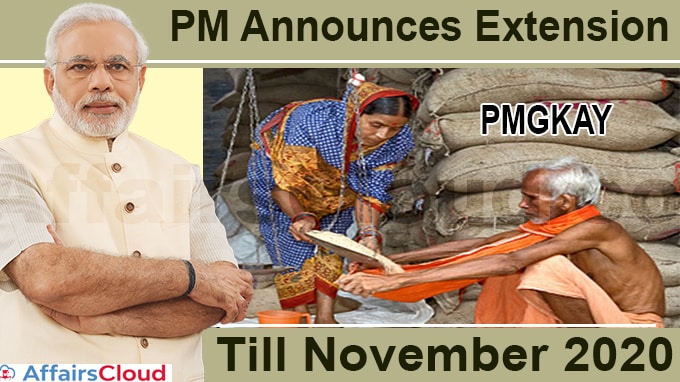 On June 30, 2020, Prime Minister Shri Narendra Modi, during televised address to the nation, has announced the extension of Pradhan Mantri Garib Kalyan Ann Yojana (PMGKAY) from July, 2020 till the end of November 2020, with an outlay of more than Rs 90,000 crore.

-Centre has provided a total of 116.34 lakh metric tonne (LMT) food grains for the April-June period which have been lifted by various States & Union Territories (UTs). With regard to pulses, Centre has dispatched 5.79 LMT Pulses and 4.47 LMT pulses has been distributed

-Wheat has been allocated to 6 States/UTs, – Punjab, Haryana, Rajasthan, Chandigarh, Delhi and Gujarat and rice has been provided to the remaining States/UTs.

Efforts by Govt when lockdown announced

-Central Government brought Pradhan Mantri Garib Kalyan Yojana (PMGKY), under which a package of Rs 1.75 lakh crore for the poor was announced.

-In April-June period of 2020, Rs 31,000 crore has been transferred in the Jan Dhan accounts of almost 20 crore poor families.

-Rs 18,000 crore has been transferred to the bank accounts of more than 9 crore farmers.

-Rs 50,000 crore is being spent on PM Garib Kalyan Rojgar Abhiyaan, which has been started to provide employment opportunities.

–One Nation One Ration Card: As on 01 June 2020, it is enabled in 20 States/UTs, namely – Andhra Pradesh, Bihar, Daman & Diu (Dadra and Nagar Haveli), Goa, Gujarat, Haryana, Himachal Pradesh, Jharkhand, Kerala, Karnataka, Madhya Pradesh, Maharashtra, Mizoram, Odisha,  Punjab, Rajasthan, Sikkim, Uttar Pradesh, Telangana and Tripura. By 31st March 2021 all remaining States will be added and the scheme will be operational all over India.