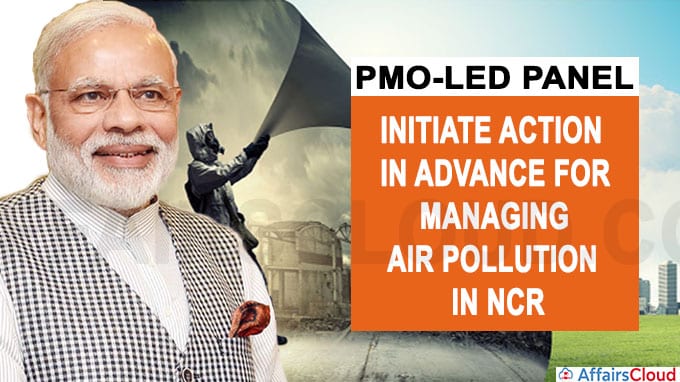 On September 18, 2020, a high-level task force led by Dr Pramod Kumar Mishra, Principal Secretary to the Prime Minister reviewed the action taken by agencies and firm up plans for the coming harvesting and winter season during a meeting with Chief Secretaries of Delhi, Punjab, Haryana, Rajasthan and Uttar Pradesh, Secretaries of different departments/ministries of the central government including M/o of Environment, Forest & Climate Change, Agriculture, Road, Petroleum and Central Pollution Control Board (CPCB).

–The meeting reviewed the main sources of air pollution, measures taken and the progress made by the State Governments and various Ministries was carried out.

–As Reserve Bank of India (RBI) included residue based power /fuel plants under priority sector lending (PSL) therefore both State and Central Governments will jointly work out action plans for rapid deployment of such units.

–The importance of effective implementation of the existing in-situ management of crop residue scheme of the Ministry of Agriculture by the States was highlighted.

–State Governments mandated for the deployment of new machinery for farmers in the current year before the start of the harvesting season.

— Government of National Capital Territory (GNCT)-Delhi was requested to ensure measures to control local sources of pollution with a support of the Ministry of Agriculture.

–To control stubble burning, it was stressed that an adequate number of teams should be deployed at ground level to ensure that no stubble burning takes place especially in the State of Punjab, Haryana and Uttar Pradesh (UP).