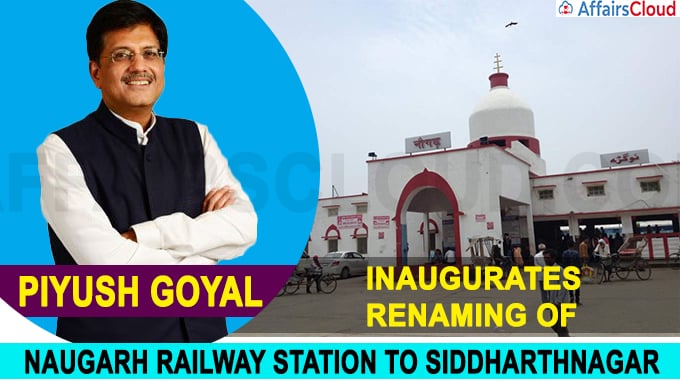 The Naugarh railway station was named Siddharthanagar due to the following reasons:

Note- Many Buddhist tourists/ pilgrims come to Lumbin and the area has been declared a World Heritage Site by UNESCO(United Nations Educational, Scientific and Cultural Organization).

i.A new railway line of 240 km from Khalilabad to Bahraich through Dumariyaganj-Utraula-Balrampur-Shravasti has been approved for construction.

ii.The completion of this project will accelerate the development of Sant Kabir Nagar, Siddharthnagar, Shravasti, Bahraich and Gonda districts.

ii.Similarly, 4,682 km electrification has also been completed in UP.

iii.1,404 unreserved crossings were abolished in UP to prevent accidents.

iv.Railways have invested a total of  Rs 10,600 crore  for the development in UP in the last 6 years.

On the occasion of World Environment Day ( June 05, 2020), the Maharashtra cabinet chaired by its Chief Minister (CM) Uddhav Bal Thackeray has approved a proposal to rename the state’s Environment Ministry as ‘Environment and Climate Change Ministry’ with the aim to play an active role in climate change mitigation. The department, which is handled by Shiv Sena MLA (Member of the Legislative Assembly) Aaditya Thackeray, will work on five elements of nature (earth, water, fire, air, and space).