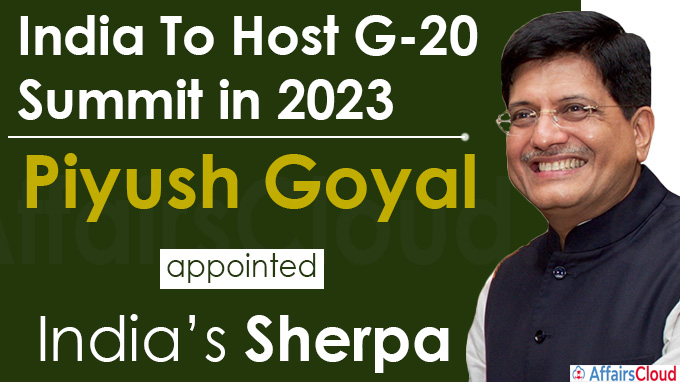 On September 7, 2021, Union Minister Piyush Vedprakash Goyal, Ministry of Commerce and Industry was appointed as India’s Sherpa for the G20 (Group of Twenty) by replacing former Union Minister Suresh Prabhu.

iv.G20 is a major international grouping that accounts for more than 80% of global GDP (Gross Domestic Product), 75% of global trade and 60% of global population.

On September 5-6, 2021, the G20 Health Ministers’ Meeting 2021 was held under the Italian Presidency in Rome, Lazio (Italy). It was chaired by Roberto Speranza, Italian Minister of Health.

iii.Contribution through joint efforts will be continued to prevent, detect and respond to global health risks and emergencies.

iv.They also recognized the importance of gender when designing and implementing health policies

The 3rd G20 Finance Ministers and Central Bank Governors Meeting (FMCBGs) held on July 9-10, 2021 was hosted by Italy in its city Venice, Veneto. India was virtually represented by Union Minister Nirmala Sitharaman, Ministry of Finance. This was the first in-person Finance Track meeting since February 2020.

The 2021 G20 is under the Italian Presidency. It is focusing on three broad, interconnected pillars of action: People, Planet, and Prosperity.