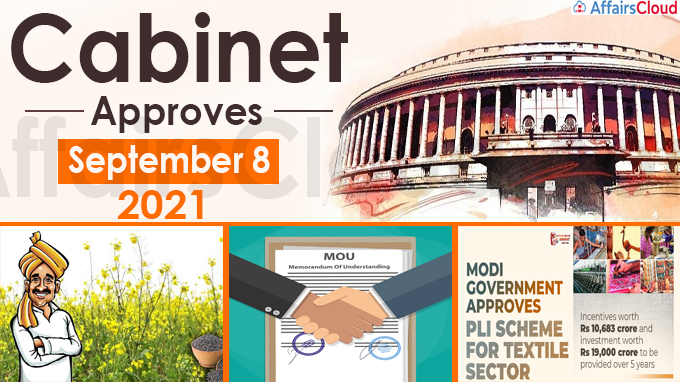 The Union Cabinet extended the production-linked incentive (PLI) scheme to the textiles sector to cover and promote textiles for MMF (man-made fibre) apparel, MMF fabrics and ten segments of technical textiles with an outlay of Rs 10,683 crore over a span for 5 years. The objective behind this scheme is to help Indian companies emerge as global champions.

What is Technical textile and MMFs?

It is a new-age material used for the production of personal protective equipment (PPE) kits, airbags, bulletproof vests, and can also be used in sectors such as aviation, defence, and infrastructure.

i.This scheme will aid in creating employment for over 7.5 lakh people directly, several lakh jobs for supporting activities along with the women participation.

iv.This scheme will offer two types of investment with different sets of incentives:

The above PLI scheme is a part of the overall announcement of the PLI scheme for 13 sectors made during the Union Budget 2021-22, with an outlay of Rs 1.97 lakh crore.

The Cabinet Committee on Economic Affairs (CCEA) has approved the increase in the Minimum Support Prices (MSP) for all mandated Rabi crops for Rabi Marketing Season (RMS) 2022-23.

National Mission on Edible Oils-Oil Palm (NMEO-OP): It is a centrally sponsored scheme worth Rs.11,040 crore to increase the domestic production of edible oils and reduce imports dependency. This will also benefit the farmers by increasing their income and generation of additional employment.

Pradhan Mantri Annadata Aay SanraksHan Abhiyan’ (PM-AASHA): Launched in 2018 it helps in providing remunerative return to farmers for their produce.

The Cabinet Committee on Security approved the procurement of 56 C-295MW transport aircraft from Airbus Defence and Space S.A., Spain for the Indian Air Force (IAF) which will replace its ageing Avro aircraft with it.

ii.All aircrafts will be installed with indigenous Electronic Warfare Suite.

How will aircraft manufacturing in India be beneficial?

i.This program will boost the Atmanirbhar Bharat Abhiyan and Make in India initiative in the domain of aerospace. It will involve several MSMEs (Micro, Small & Medium Enterprises) and Private Sector to manufacture parts of the aircraft. This offers them an opportunity to enter into the highly competitive aviation Industry.

ii.During manufacturing in India, it is expected that all the suppliers of TATA Consortium will gain globally recognized National Aerospace and Defence Contractors Accreditation Program (NADCAP) accreditation.

Cabinet Approval with Other Countries:

The Union Cabinet has approved the signing of Memorandum of Understanding (MoU) between Institute of Chartered Accountants of India (ICAI) & The Chamber of Auditors of the Republic of Azerbaijan (CAAR).

i.Both ICAI and CAAR intend to strengthen cooperation through sharing of knowledge, and best practices in the field of accountancy.

ii.These two entities will also cooperate in the fight against corruption and money laundering.

iii.They will also undertake a study on application of new innovative methods in the field of audit and accounting, including application of blockchain, smart contract system, transition from traditional accounting to cloud accounting.

iv.CAAR was established in accordance with the Law on Audit of 1994 as amended in 2004 to regulate the audit profession in the Republic of Azerbaijan.

About Institute of Chartered Accountants of India (ICAI):

The Union Cabinet has approved the signing of MoU on cooperation in the field of Geosciences between the Joint Stock Company Rosgeologia (State holding Company) (referred to as ROSGEO), a legal entity incorporated under the laws of the Russian Federation and the Geological Survey of India (GSI), Ministry of Mines, Government of India.

What is in the MoU?

Both entities will cooperate in technological collaboration on exploration for deep-seated or concealed mineral deposit; analysis and interpretation of the aero-geophysical data; Joint development of the Indian Geoscience Data repository with the Russian state-of-the-art Information Technology; exchange of technology & knowledge in the field of drilling, sampling and laboratory analysis to achieve data accuracy, and cost optimization; and training and capacity building of scientific personnel etc.