Paytm, one of the fastest growing mobile wallet and e-commerce industry in India has achieved a new milestone by becoming the sole member of Advertising Standards Council of India (ASCI). The order was passed by ASCI and PAYTM is all set to become its member by April.

Reason behind this move

The members of ASCI include advertisers from various sectors, such as fast-moving consumer goods (FMCG), media, auto and telecom, which spend heavily to stay visible in the marketplace. But there is no single e-commerce company in this list.

A complaint was filed against PAYTM to ASCI on November 2016, due to the misleading add 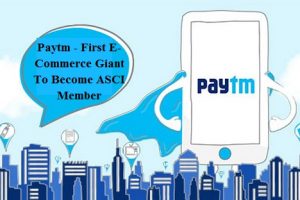 stating “flat 50 per cent cash back”, which was found limited to Rs 150 only.

By becoming a member of ASCI, companies submit themselves to the ASCI Advertising Code, conveying the message that they wish to be responsible advertisers.