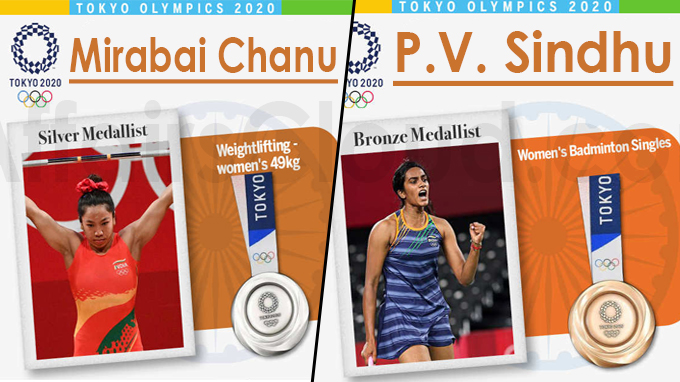 MirabaiSaikomChanu (Manipur) won the Silver Medal in 49kg Weightlifting category with a total lift of 202 Kg. She became 1st Indian Weightlifter to win Silver in Olympics.

Other Significant Achievement of Indians

i.Tennis – SumitNagal (Haryana) defeated Denis Istomin (Uzbekistan) in his opening round match. With this, he became the 1st Indian since 1996 (3rd overall) to win a singles match at the Olympics.

ii.Hockey – VandanaKatariya (Uttarakhand) became the 1st Indian woman to score a hat-trick at Olympics, she scored three goals during the match against South Africa.

iv.Papua New Guinea’s Loa Dika Toua became the 1st Weightlifter to participate in 5 Olympics. She has been participating in the Weightlifting event ever since it was introduced in the 2000 Sydney Olympics.

v.Bermuda’s Flora Duffy won the Gold medal in the Triathlon event. With this, Bermuda became the smallest country to win Olympic Gold.

vii.South Korean Archer ‘An San’ became the 1st woman since 1904 to win 3 Golds in Archery at the same olympics. She won Gold in Mixed Teams, Women’s teams and Individual events.