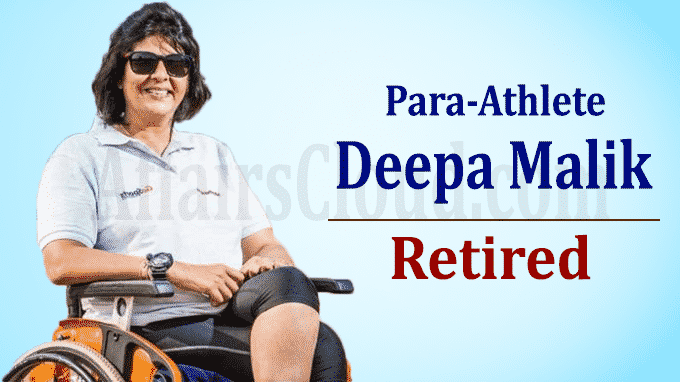 On May 11, 2020 The 1st Indian woman to earn a medal at the Paralympic Games(silver at the Rio Paralympics, 2016) Shot-putter Para-athlete Deepa Malik(49-year-old) has announced retirement as per the national sports code so as to hold her post as the President of the Paralympic Committee of India(PCI).She is also the first female athlete to represent India at the Paralympics, since the country’s debut at the Games in 1968.

i.Submitted her name for PCI elections a long time back & now she is officially declaring her retirement from the sport for her affiliation with the Ministry of Youth Affairs and Sports (MYAS)  by making a public declaration of retirement from active sports.

ii.Won 58 national and 23 international medals & has 15 years of sports journey

iii.Collaborated with the Sports Authority of India as a moderator to do the educational zoom session for para-athletes in the country.
National Sports Code– an active athlete cannot hold an official post in any federation