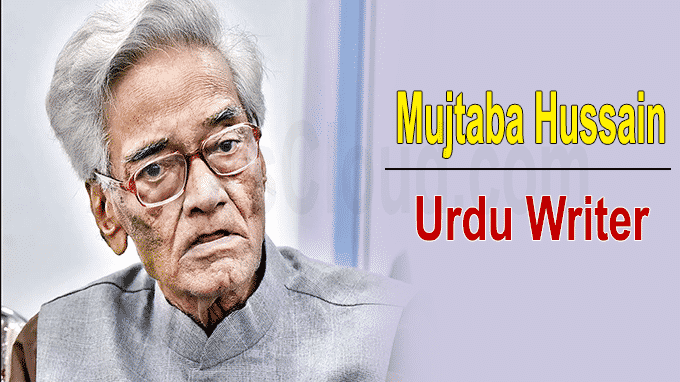 i.About Mujtaba Hussain: He was often described as the Mark Twain of Urdu. Hussain began his literary career from “Siasat”, a leading Urdu daily published from Hyderabad.

ii.Mujtaba Hussain was the brother of famous writer Ibraheem Jalees and veteran journalist Mahbub Hussain Jigar, who was associated with ‘Siasat’.

iii.Books: The account of his life has been published as a book titled “Mujtaba Hussain Jaisa Dekha Jaisa Paya” and “Mujtaba Hussain Aayeinon ke Beech” (deals with his art and styles). The books were published by the Educational Publishing House, Delhi.

iv.He also authored several books and travelogues, including ‘Japan Chalo Japan’ considered one of his biggest contributions to Urdu literature as the book covers rare and amusing insight into Japan.

v.His works were translated into Oriya, Kannada, Hindi, English, Russian and Japanese languages. Many PhDs (Doctor of Philosophy) were done on him by different scholars from across India during his lifetime.

vi.Awards: The Government of India (GOI) awarded the fourth highest civilian honour of the Padma Shri to Mujtaba in the year 2007 by then-president Dr Abdul Kalam. In 2019 following the Citizenship Amendment Act, he returned his Padma Shri as he was not happy with the situation in the country.