ii. He was accompanied by a high-level delegation including Minister of State for Social Justice and Empowerment Krishan Pal Gurjar, two Members of Parliament and a team of senior officials.

On October 31, 2018, Vice President M Venkaiah Naidu received by the Vice President of Botswana, Mr. Slumber Tsogwane, the High Commissioner of India to Botswana, Dr. Rajesh Ranjan and others, on his arrival, in Gaborone, Botswana. 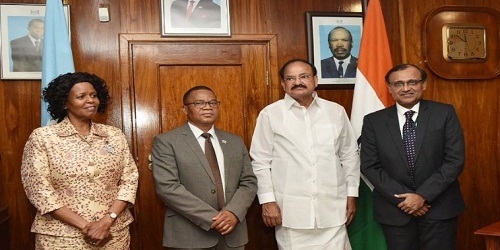 About the forum:
It is the largest business meet in the southern African country and is organized by the Botswana Investment and Trade Centre (BITC).

Background:
Bilateral trade has grown to $1.75 billion in 2017-18 – an impressive growth of 27 percent over the previous year.

iii. On his meet with the Vice president, he also signed the Visitor’s Book, at the Office of the President of Botswana.

Other News:
He also met President of Botswana, Dr. Mokgweetsi Eric Masisi, before his departure to Zimbabwe.

On November 2, 2018, Vice President, Shri M. Venkaiah Naidu reached Harare, Zimbabwe for his 2nd leg of the official tour at the invitation of Vice President of Zimbabwe. i. He was received by the Vice President of Zimbabwe, Mr. Kembo Mohadi.

India, Zimbabwe sign 6 agreements in various fields including Mining & Visa waiver:
i. On his meeting with the Vice President of Zimbabwe, 6 MOUs were signed.
ii. Following MOUs were signed between the 2 countries: 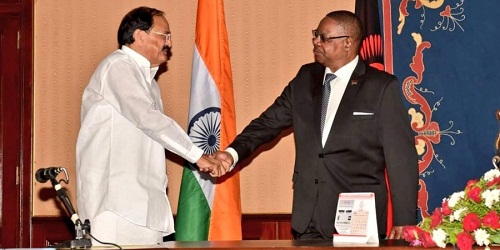 i. He was received by Minister for Foreign Affairs & International Cooperation, Malawi, Dr. Emmanuel Fabian, Minister of Education, Mr. Bright Msaka, High Commissioner of India to Malawi, , Shri Suresh Kumar Menon.
ii. This was the third and final leg of his three-nation tour of Africa.

V.P addressed Malawi-India Business Meet, in Lilongwe, Malawi
On November 5, 2018, VP Venkaiah Naidu attended the Malawi-India Business Meet, in Lilongwe, Malawi.
i. Malawi is rich in natural resources like high-quality coal, rare earth materials like Uranium, Niobium etc and can become a good source of rare earth and other minerals.
ii. For furthering the economic engagement between the 2 countries, Indian companies could form partnerships in Malawi both for the domestic economy and for the wider South African Development Community (SADC) and Common Market for Eastern and Southern Africa (COMESA).
iii. The engagement could be for two-way trade and investment in

iii. Both the countries acknowledged recent developments in health sector with :
Partnership between Medical health insurer, MedHealth, and Yashoda Hospitals of India to enhance the rapid evacuation (medevac) of patients in emergency situations.

3 MOUs were signed with Malawi:
The MOUs are: