On October 17, 2018, the Vice President of India, Shri M. Venkaiah Naidu commenced his visit to Belgium to attend the two-day 12th Asia-Europe Meeting (ASEM) in Brussels, Belgium.
The Vice President returned to India on October 21, 2018. 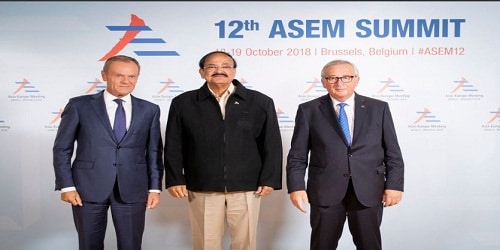 i. Indian delegation was led by Vice President of India, Shri Venkaiah Naidu.
ii. The theme of this years’ ASEM Summit is “Global Partners for Global Challenges”.
iii. It was hosted by the European Union was chaired by the President of the European Council Donald TUSK.
iv. As many as 51 Heads of States/ Heads of Government participated in the event.
v. The 12th ASEM Agenda for 2018 prioritized issues like:
Connectivity, trade and investment, sustainable development, climate change terrorism, migration, maritime security and cyberspace.
vi. Speaking at the 1st Plenary Session of the Summit, he highlighted the following:

Meeting with Belgian King:
On October 18, 2018, Vice President of India, Shri Venkaiah Naidu called on His Majesty King Philippe of the Belgians at the Royal City Palace.
i. They discussed about the following:

ii. His Majesty, King Philippe had hosted the ASEM Summit in 2010 when Belgium had held the rotating Presidency of the European Union.

Meetings with other delegates:

i. In the meeting they also discussed the following:

ii. The PM of Greece encouraged Indian companies to consider investing in Greece, particularly in the port sector.
iii. He also extended an invitation to Prime Minister Modi to visit Greece at an opportune time.
iv. Prime Minister Tsipras invited India as the “Honored Country” at the Thessaloniki International Fair in 2019.
v. They both acknowledged the work of Greek scholar Demetrios Galanos who had translated, among other texts, the Bhagvad Gita into Greek.

ii. VP acknowledged the collaboration of Portugal companies with Indian companies for development, such as:

iii. Portugal joined as a member of the Committee set up to commemorate the 150th birth anniversary of Mahatma Gandhi worldwide.

Background:
Earlier in January 2017 PM Costa had been honored with the Pravasi Bhartiya Samman Award on his state visit to India.