We are here for you to provide the important Current Affairs October 22 2018, which have unique updates of all daily events from all newspapers such as The Hindu, The Economic Times, PIB, Times of India, PTI, Indian Express, Business Standard and all Government official websites. i. He also announced an annual award in the name of Netaji Subhash Chandra Bose, to honour the police and paramilitary personnel, involved in disaster response operations.
ii.  He also inaugurated the Museum of National Police memorial.
iii. He urged the police forces to adopt technology and innovation in their daily discharge of duties.
iv. This is why, he mentioned about the Modernization of Police Forces Scheme (MPF), which modernized the police forces through technology, modern communication systems and modern weapons.
Other News:
i. PM Modi also commemorated the 75th anniversary of Netaji’s declaration of the formation of India’s first independent government- the Azad Hind Government on October 21, 1943.
ii. He hoisted the National Flag at Red Fort and announced that the annual award n the name of Netaji Subhash Chandra Bose would be announced on January 23, Netaji Subhash Chandra Bose’s birthday.
The National Police Memorial:
♦ It consists of Central Sculpture, a Wall of Valour-engraved with the names of police personnel who laid down their lives in the line of duty and
♦ A State of Art Museum dedicated to the memory of the martyred police personnel.
♦ Located:  New Delhi.
♦ Police Commemoration Day: October 21.

iii. It had also asked the Ministry of Labour and Employment to collect, with regard to the total number of PF trusts under the PF Act, 1925, information about the number of subscribers and total contribution from subscribers.
Background:
i. Earlier, the panel had suggested that the EPFO should act as the sole regulator for all categories of provident funds particularly private PF trusts.
ii. However, at present, the EPFO is not the sole PF organisation or regulator in the country.
EPFO:
♦ Headquarters: New Delhi.
♦ CEO or Central Provident Fund Commissioner in EPFO: Shri. Sunil Barthwal.
♦ Under the Employee’s Provident Fund and Miscellaneous Provisions Act 1952.

Four Himalayan peaks named after former PM Vajpayee: Ministry of Tourism
On October 20, 2018, 4 Himalayan peaks near Gangotri have been named after former Prime Minister Atal Bihari Vajpayee.
i. This was done during an expedition conducted by Nehru Institute of Mountaineering and the tourism department.
ii. The expedition was flagged off from Dehradun on October 4 by Chief Minister of Uttarakhand Trivendra Singh Rawat.
iii. They climed the peaks located at 6,557, 6,566, 6,160 and 6,100 metres on the right flank of Gangotri glacier, and named them Atal-1, 2, 3 and 4, while hoisting the national flag.
iv. The peaks are located near Sudarshan and Saifi peaks in Raktvan valley.
Tourism Ministry:
Minister of State (Independent Charge): MR. K J Alphons. 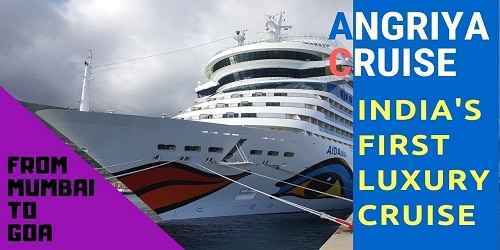 i. It was launched by Union Shipping, Ports and Road Transport Minister Nitin Gadkari in Mumbai.
ii. It is a joint venture between Mumbai Port Trust and Angriya Sea Eagle Pvt Ltd.
iii.  The cruise ship Angriya has been named after first Maratha Navy Admiral Kanhoji Angre and the great Angria bank coral reef near Vijaydurg, Maharashtra.

India’s longest river bridge to be built on Brahmaputra river in Assam
On October 21, 2018, it was announced that India’s longest river bridge will be built across the Brahmaputra, connecting Dhubri in Assamto Phulbari in Meghalaya, by 2026-27.
i. It will be a 19.3 km, four-lane bridge that will cut road travel by 203 km .
ii. The new bridge will complete the missing link of NH127B from Assam to Meghalaya.
iii. The bridge will also improve connectivity from West Bengal to Assam.
iv. For the project, the National Highways and Industrial Development Corporation Limited (NHIDCL), recently reached out to global players in France.
v.The Japanese funding agency Japan International Cooperation Agency (JICA) has approved a loan for this project as a part of a road infrastructure improvement package in the North East.
Background:
Currently, the longest river bridge in India, at 9.15 km, is the Dhola-Sadiya Bridge which was opened in 2017.
Assam:
♦ Capital: Dispur.
♦ Chief Minister:  Sarbananda Sonowal.
♦ Governor: Jagdish Mukhi.
♦ National Parks: Kaziranga National Park, Manas National Park (UNESCO Natural World Herigate Site), Orang National Park, Dibru-Saikhowa National Park.
♦ Airports: Lokpriya Gopinath Bordoloi International Airport, Dibrugarh Airport, Jorhat Airport, Tezpur Airport, Silchar Airport. 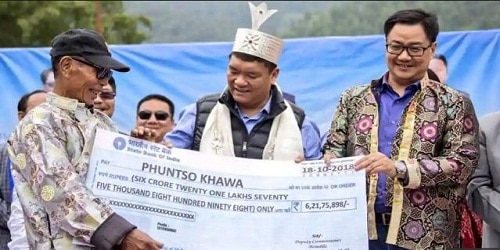 i. He distributed nearly Rs 37.73 crore as compensation to the villagers of the state, more than 56 years after India’s war with China.
ii. It was for the land acquired by the Army to set up its bases, bunkers and barracks.
iii. Earlier, In April 2017, Rs 54 crore was distributed among 152 families of three villages of West Kameng district. In September that year, another installment of Rs 158 crore was distributed among the villagers for the private land taken over by the Army.
iv. And in February 2018, Rs 40.80 crore was handed over to 31 families in Tawang district.
Background:
After the 1962 India-China war, the Army had acquired huge tracks of land to set up its bases, bunkers, barracks, construct roads, build bridges and other installations.
Arunachal Pradesh:
♦ Chief Minister: Pema Khandu.
♦ Governor: B.D. Mishra.
♦ Capital: Itanagar.
♦ National Parks: Namdapha National Park, Mouling National Park.

Man-animal conflict a ‘State Declared Disaster’: UP government
On October 17, 2018, in a first-of-its-kind move, the Uttar Pradesh government made the man-animal conflict a ‘State Declared Disaster’.
Objective:
To help reduce retaliatory killings.
Key Points:
i. These incidents would be under the ambit of State Disaster Response Fund (SDRF).
ii. According to the provisions of the order, a compensatory amount of Rs.5 lakh would be given to family of deceased if the victim of the animal attack dies.
iii. The disbursement of compensation for injury would be in accordance to SDRF guidelines.
iv. It also states that the amount of Rs 1 lakh per death would be arranged by the state forest department from its own budget to the Revenue Department.
v. It ensures that the amount must be paid within 24 hours of the incident RTGS and the production of the post-mortem examination report of the victim would be made available.
vi. It urges creating awareness, police support in conflict prone areas.
Other News:
For the first time, lion and wild boar have been added to the list of wild animals which includes tiger, leopard, Indian wolf, hyena, crocodile, elephant and rhinoceros as predators.
Uttar Pradesh:
♦ Chief Minister: Yogi Adityanath.
♦ Governor: Ram Naik.
♦ National Parks: Dudhwa National Park, Philibit Tiger Reserve , Sandi Bird Sanctuary.
♦ Uttar Pradesh has 23 wildlife sanctuaries across 27 districts covering over 5,000 sq km.
♦ UNESCO Heritage Site: Agra Fort, Fatehpur Sikri. 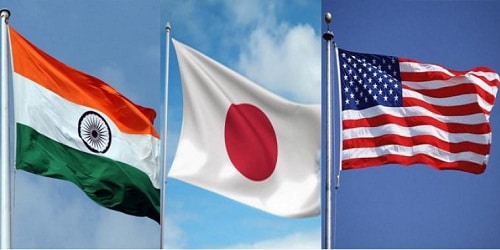 i. The final planning conference will held in Kalaikunda, West Bengal.
ii. This will be the first time Japan would be invited to participate in the exercise.
iii. Japan would send observers and for the next round that would be hosted by Indian Air Force.
iv. This trilateral exercise was proposed by the U.S. at the annual defence minister meeting in August 2018.
About Cope India:
The first such exercise was conducted at IAF air force station in Gwalior from February 2004.
Japan:
♦ Capital: Tokyo.
♦ Currency: Japanese yen. 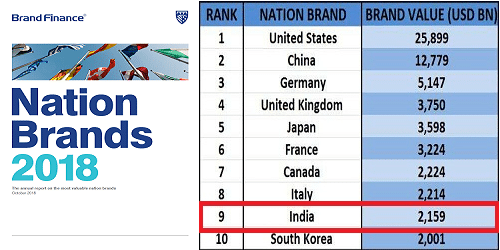 i. Eventhough India’s brand value has increased to $2,159 billion in 2018 from the value of $2,046 billion in 2017,it slipped one spot.
ii. U.S has topped the list with a brand value of $25,899 billion which rose by 23% from last year.China ranked 2nd with a brand value of $12,779 billion and Germany was ranked 3rd with $5,147 billion which increased by 28% from the last year.
iii. Brand Finance measures the strength and value of the brands using a method based on the royalty relief mechanism employed to value the world’s largest companies. It looks into nation brand strength, royalty rate, revenues, weighted average cost of capital (WACC) or discount rate and brand valuation.

SBI launches “Wealth Hub” in Mangaluru
On October 20,2018 State Bank of India has launched “SBI Wealth Hub” in Lalbhag Branch,Mangaluru.SBI is the first bank to introduce wealth business services for its customers.
The wealth hub was launched by SBI Chairman Rajnish Kumar. The bank has also launched Wealth Business services for NRIs and is in the process of setting of a state-of-the-art global e-Wealth centre at Kochi. 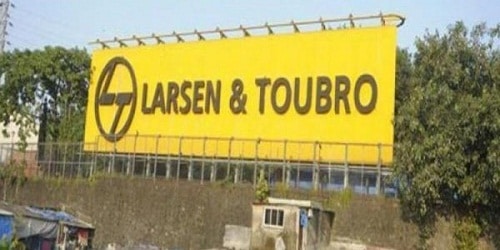 i. L&T has secured 22nd rank in the list. Google’s parent company Alphabet tops the list. Second position is occupied by Microsoft.
ii. There are only 24 Indian companies in the overall list and only 4 Indian companies in the top 100 list.(Mahindra & Mahindra at 55, Grasim Industries at 59 and HDFC at 91)
iii. This list is based on Forbes’ 2018 global 2000 rankings. It includes publicly traded companies from 60 countries. 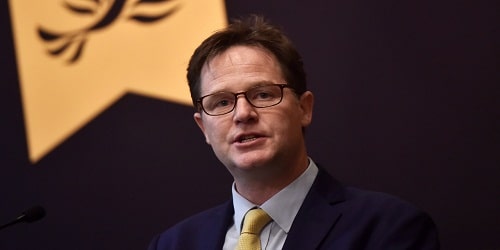 i. The appointment makes Clegg the most senior European politician ever in a leadership role in Silicon Valley.
ii. Clegg, 51, would succeed Elliot Schrage.
Background:
In March, the company faced new scrutiny over how it protects personal information after acknowledging that the data of up to 87 million people ended up in the hands of political consultancy Cambridge Analytica.
Facebook:
♦ Headquarters: California, USA.
♦ Chief Executive Officer: Mark Zuckerberg
♦ Chief Operating Officer: Sheryl Sandberg.

New material harvests Sun’s heat for cheaper electricity
On October 21 2018 a material has been developed by scientist that able to harvest the electricity from Sun’s heat which will be generating cheaper solar power on cloudy days and at nighttime.
i. Solar energy can be stored as heat to produce the electricity which will be cheaper than storing energy via batteries… click here to read more info from referenced news site i. It is a compilation of interviews of eminent sportspersons he has conducted since 1971.
ii. He has interviewed Olympians like Balbir Singh Senior, Abhinav Bindra, Sushil Kumar, Sakshi Malik, Col Rajyavardhan Singh Rathore and others.
iii. Among the cricketers, he has interviewed MAK Pataudi, GR Viswanath, Eknath Solkar while Gautam Gambhir, Unmukt Chand etc.
iv. He has been a member of BCCI’s Statistical Committee apart from being an English teacher.
v. Earlier, he had published a book on Statistics called ‘Indian Test Cricket back in 1974’.
vi. In 2016, he authored a second book “The Complete Indian Sports Quiz” inaugurated by sports minister Rathore.
BCCI:
♦ Headquarters: Mumbai.
♦ Full form: BOARD OF CONTROL FOR CRICKET IN INDIA.

World Trauma Day (WTD) – October 17
On 17th October 2018, World Trauma Day was observed all over the world.
i. This day creates awareness on the increasing rate of accidents and injuries causing death and disability throughout the world and the need to prevent them.
ii. Trauma means any injury caused to the body. The injury may be caused due to various reasons like road accidents, fires, burns, falls, violence and crimes against women, children and elderly, etc.
iii. Road Traffic Accident is the leading cause of trauma throughout the world.