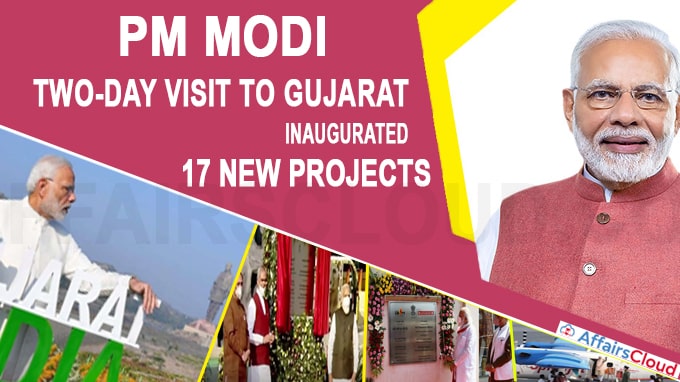 Prime Minister Narendra Modi paid a two-day visit to Gujarat from October 30-31, 2020. He inaugurated 17 projects around the Statue of Unity in Kevadia, Gujarat and  laid the foundation stone for 4 new projects.

Highlights from the Visit:

i.The seaplane is a 19-seater seaplane and will be operated by SpiceJet.

iii.This is the first of the five seaplane services in Gujarat. The other spots are Dharoi dam in Mehsana district, to connect ambaji and shatrunjay dam in Palitana of Bhavnagar district and Tapi will be started in the next phase.

i.It is the fastest ever built Jungle Safari.

iii.It is spread over an area of 375 acres at seven different levels ranging from 29 to 180 meters and has more than 1100 Birds & Animals and 5 Lakh plants.

iv.It has two aviaries (enclosure for keeping birds in) – one for domestic birds and another for exotic birds.

i.Unity Glow Garden which is the First-of-its-kind in India is a theme park spread over an area of 3.61 acres.

ii.It has an glimmering array of installations, figures and optical illusions.

i.Cactus Garden is a grand architectural greenhouse with 450 national and international species from 17 countries.

ii.It is spread over an area of 25 acres and has around 6 lakh plants including 1.9 lakh cactus plants.

Ekta Mall displays a wide range of handicrafts and traditional items from all over India symbolizing unity in diversity.

i.It is a special store constructed near the State of Unity, tourists can buy handloom and handicraft products belonging to different states under one roof.

ii.It has been developed on the theme of Unity in Handicraft & Handloom Diversity.

iii.The Mall which was built in 110 days is spread over 35000 Square feet and consists of 20 Emporia each representing a specific state in India.

iv.It houses the emporia of Garvi Gurjari, Purbashree, Kairali, Mrugnayani, Pumpuhar, Gangotri, Kavi. It also includes stores of Khadi India and Coir Board and other establishments.

i.It is the world’s first ever technology drive nutrition park for children and is spread over an area of 35, 000 square feet.

ii.The nutrition park includes a Nutri train which runs across the park to various theme based stations such as ‘Phalshaka Griham’, ‘Payonagari’, ‘Annapoorna’, ‘Poshan Puran’, and ‘Swastha Bharatam’.

He introduced a website of Statue of Unity in all the United Nations (UN) official languages and launched the Kevadia Mobile App.

i.The Website and app will guide tourists visiting the Statue of Unity, Kevadia.

ii.Arogya Van (Health Forest) has 5 Lakh Plants of 380 different species spread over an area of 17 acres.

i.The Prime Minister inaugurated the Ekta Cruise Service through which tourists can experience beautiful views of the Statue of Unity.

ii.The 40 Minute Ferry Boat Service operates from Shrestha Bharat Bhavan to Statue of Unity by covering a distance of 6 kilometres.

iii.The boat is capable of ferrying 200 passengers at a time.

iv.A New Gora Bridge has been built specially for the operation of the ferry service.

v.A Boating Channel has been constructed to provide boating services to tourists visiting the Statue of Unity.

He also unveiled Dynamic Lighting for the Sardar Sarovar Dam in Gujarat.

PM also performed a virtual stone-laying ceremony for government quarters, quarters for State Reserve Police Personnel, Adarsh Gram, a project of 400 houses for the resettlement of project-affected people from five villages around the statue of unity.