The Deputy Prime Minister of New Zealand (NZ) and Minister of Foreign Affairs, Winston Raymond Peters has paid a 4-day official visit to India from February 25-28, 2020. He was accompanied by NZ Trade Minister David Parker and a business delegation. The visit in detail are as follows, 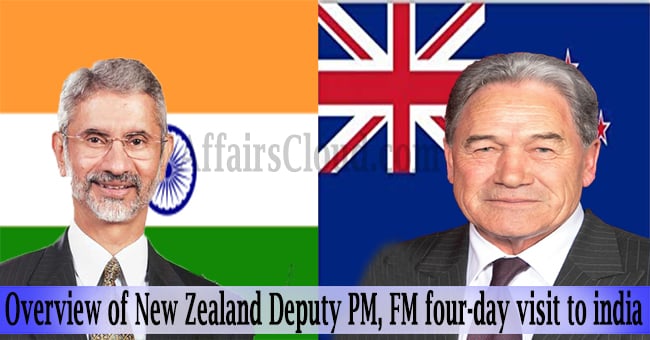 Arrival: Winston Peters has arrived at Indira Gandhi International Airport  (IGI) in New Delhi and visited Rajghat(a monument in Delhi) to pay tributes to Mahatma Gandhi, the father of the nation.

Prior visiting India, New Zealand Deputy PM had released the New strategic paper “India-New Zealand 2025: Investing in the relationship”, which is a continuation of the New Zealand Inc.India Strategy 2011.Click here to read the entire report.

i.Peters then attended the inaugural ceremony of New Zealand Centre at IIT (Indian Institute of Technology) Delhi and addressed the gathering on Indo Pacific at the Indian Council of World Affairs, New Delhi.

ii.Indian side thanked New Zealand for its support for Indo-Pacific Ocean’s Initiative (IPOI) and on the International Solar Alliance (ISA) to boost cooperation on solar energy and climate action.

iii.Both the nations exchanged views on their view point in the Indo-Pacific region, and affirmed to work together in East Asia Summit (EAM) and other respective summits.

i.New Zealand is working to increase the number of women entrepreneurs in the overall trade between the two nations.