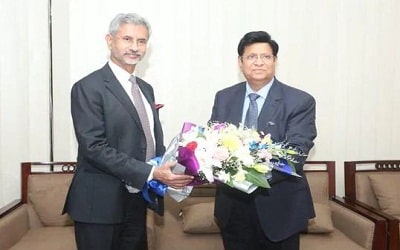 Aim:
The purpose of this visit is to affirm the strong relationship between the two countries and also to prepare for the forthcoming visit of Prime Minister Hasina to India in October 2019.

Arrival:
External Affairs Minister S Jaishankar arrived at Hazrat Shahjalal International Airport in Dhaka, Bangladesh ,where he was received by his Bangladeshi counterpart AK Abdul Momen. The visit is the 2nd high ministerial interaction between the two sides in less than a month. On August 7-8,2019 Bangladesh’s Interior Minister Asaduzzaman Khan held a bilateral meeting with Home Minister Amit Shah in New Delhi.