The Cabinet Committee on Economic Affairs (CCEA) Chaired by the Prime Minister Shri Narendra Modi has approved the following proposals on January 29, 2020. 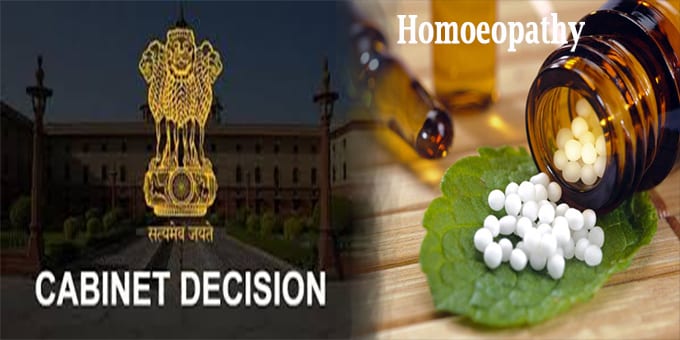 Key Points:
i.Amendment features: The amendment will make reforms in the field of Homoeopathy education and enable transparency and accountability to protect the interest of the public. Through these amendments, affordable healthcare services will be enhanced.

i.NCIM aim: The main purpose of NCIM is to promote equity by supplying adequate quality of medical professionals in the Indian system of medicine thus enforcing high ethical standards overall.

ii.NCIM Bill benefits:The bill will lead to regulations in the Indian medicine system and will also promote affordable healthcare services across the country.

ii.Other approvals: Apart from the 30% allocation, the govt has also approved the following:

iii.Projects under existing “Schemes of NEC” will benefit marginalized and vulnerable groups of people in backward and neglected areas of the North Eastern States.

Extension of PLR Scheme for Port Trust & Dock Labour Board employees beyond 2017-18 approved:
The CCEA has given its approval to extend the already existing Productivity Linked Reward (PLR) Scheme beyond 2017-18. The extension will be made applicable until any changes/ amendments made in the scheme.

ii.The scheme will benefit 28,821 Major Port Trusts and Dock employees/workers per annum. The yearly estimated outgo will be Rs. 46 crore.

iii.PLR calculation: PLR will now be calculated on existing wage ceiling for calculation of Bonus at Rs. 7000/- per month.