Vice President of India, Mr M. Venkaiah Naidu held a 5 day tour to Comoros and Sierra Leone (African countries) from October 10-14, 2019. It was the first-ever visit by a high-level Indian dignitary to Comoros, an archipelago situated off the Southeast coast of Africa and to Sierra Leone. 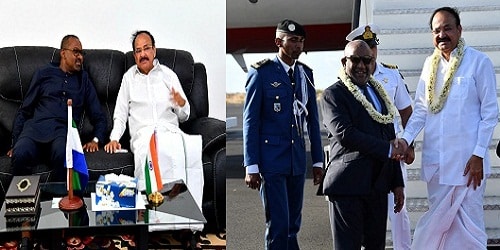 i. It was his second visit to Africa. Earlier in November 2018, he had visited Botswana, Zimbabwe, and Malawi as part of strengthening bilateral ties.
ii. High level delegation: Vice president was accompanied by a high level delegation consisting of Mr Sanjeev Kumar Balyan, Minister of State for Animal Husbandry, Dairying and Fisheries, Mr  Ramvichar Netam, Member of Parliament (Rajya Sabha) and senior officials.

Visit to Comoros (October 10-12, 2019)
Mr Naidu arrived at Moroni and was received by President of the Union of the Comoros, Mr. Azali Assoumani. He was also accorded military honours.

MoUs
India and Comoros signed 6 Memorandum of Understandings (MoUs) in the following fields in the presence of the President of Comoros Mr Azali Assoumani and the Vice President of India Mr Naidu:

LoC
i. India assured Comoros to give line of credit (LoC) over 60 million of which USD 41.6 mn for setting up an 18MW (Megawatt) power plant in Moroni and a vocational training centre.
ii. LoC of USD 20 million for the procurement of High-Speed Interceptor Boats.
iii. India will gift medicines and medical equipments worth US$ 1 Million; Gift of 1000 Metric Ton (MT) of rice; Gifting of Interceptor Boats worth USD 2 mn; Transport vehicles worth USD 1 mn.

Other highlights
i. Vice President addressed the Indian diaspora and invited them to attend the next 16th Edition of Pravasi Bharatiya Diwas (PBD) of 2021 which is a biennial event.
ii. He thanked the President of the Union of the Comoros for its continued support to India’s candidature for a permanent seat in the United Nations Security Council (UNSC).
iii. He also addressed the Comorian Parliament.
iv. Comoros will issue a postal stamp on Mahatma Gandhi on the occasion of 150th birth anniversary of Mahatma Gandhi.
v. India is the 5th largest investor in Africa with a cumulative investment of US $54 Billion.

MoUs
India and Sierra Leone signed 6 Memorandum of Understandings (MoUs) in the following fields in the presence of Mr. Julius Maada Bio, President of the Republic of Sierra Leone and the Vice President of India:

LoC
i. Loc of US$ 30 million for Irrigation development in Tomabum to achieve self-sufficiency in rice production was announced.
ii. India will also reactivate the US $ 15 million Line of Credit for potable water project and dispatch 1000 MTs of rice to Sierra Leone, as a goodwill gesture.

Other highlights
i. India announced to establish a High Commission in Sierra Leone.
ii. Vice president addressed the Indian community .