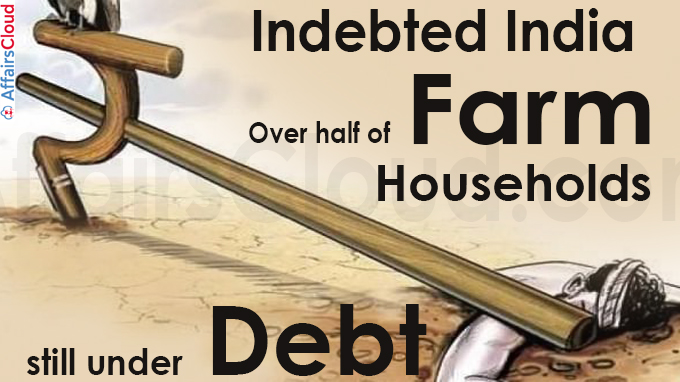 In accordance with the National Statistical Office (NSO), Ministry of Statistics and Programme Implementation, ‘Situation Assessment of Agricultural Households and Land Holdings of Households in Rural India, 2019’  released on September 10, 2021, more than half of India’s agricultural households were in debt, with an average outstanding of Rs 74,121 in 2018 as compared to Rs 47,000 in 2013, an increase of 57.7%.

i.Prior to the 77th round, Land and Livestock Holding Surveys (LHS) and Situation Assessment Survey (SAS) of Agricultural Households used to be conducted as separate surveys in separate sets of households.

ii.The percentage of agricultural households in debt has slightly reduced from 51.9% in 2013 to 50.2% in the recent survey

iv.Andhra Pradesh to have the highest average outstanding loan, at Rs 2.45 lakh. The state also had the highest proportion (93.2%) of agricultural households under debt, followed by Telangana (91.7%) and Kerala (69.9 %).

What is an agricultural household?

It is defined as one receiving more than Rs 4,000 as value of produce from agricultural activities (cultivation of field crops, horticultural crops, fodder crops, plantation, animal husbandry, poultry, fishery, piggery, bee-keeping, vermiculture, sericulture, etc) and that has at least one member self-employed in agriculture (either in principal or in subsidiary status) in the last 365 days.

In accordance with the ‘Periodic Labour Force Survey (PLFS)- Annual Report (July, 2019 – June, 2020)’ conducted by National Statistical Office (NSO), unemployment rate for women fell to 4.2% in 2019-20 from 5.1% in 2018-19. The findings of the survey were informed by Minister of State (MoS) Rameshwar Teli, Ministry of Labour and Employment in a written reply in the Lok Sabha.

About Ministry of Statistics and Programme Implementation: