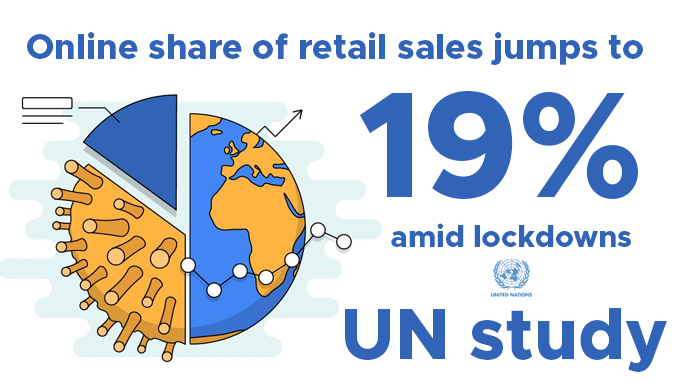 According to Estimates released by UNCTAD (United Nations Conference on Trade and Development), the Online Sales accounted for 19% (from 16% in 2019)  of Overall Retail Sales in 2020. The increase in online sales has been due to the pandemic.

i.The Estimates were released in UNCTAD’s Report – ‘Estimates of Global e-commerce 2019 and preliminary assessment of covid-19 impact on online retail 2020’.

iv.The USD 26.7 Trillion value reached by e-commerce is equal to 30% of the Global Economic Output.

i.The Top 3 e-commerce companies based on Gross Merchandise Value (GMV) in 2020 are

According to the Estimates of Global e-commerce 2019,

i.According to a report released by EY-IVCA, India’s e-commerce market is expected to be worth USD 99 Billion by 2024.

About United Nations Conference on Trade and Development (UNCTAD)