According to the latest Economic Outlook 2019 released by OECD (Organisation for Economic Co-operation and Development) on November 21, 2019, World GDP(Gross domestic product)  growth is expected to be at 2.9% in 2020, its lowest annual rate due to the risk posed by trade stress. This is 0.1% lower than the earlier estimate released in September 2019. It also forecasts global economic growth to 3.0% for the year 2021. 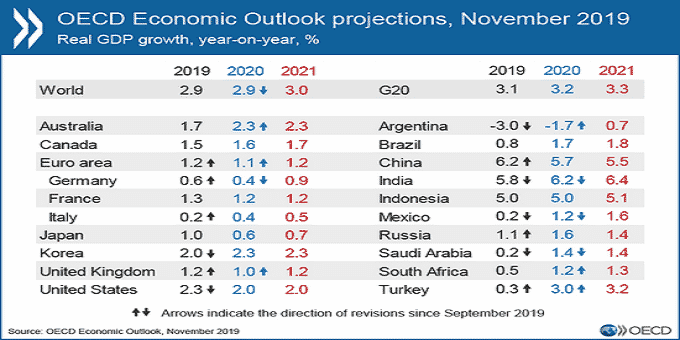 i.Reason: Global growth results and prospects have sharply decreased since the global financial crisis in 2007 due to continued policy uncertainty and weak trade and investment flows.

iii. Policy-making:The central banks have taken decisive and timely decisions on the monetary policy front. This helped to cope to some extent from the effects of trade stress. But most governments did nothing on the fiscal front.