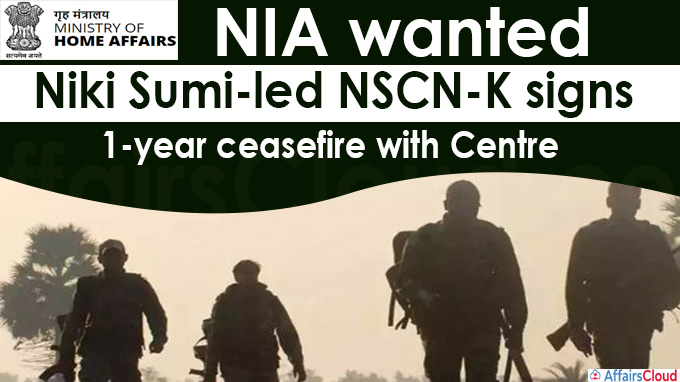 i.Previously, NSCN (K) had signed a ceasefire agreement with the Indian government, which was later unilaterally abrogated by the terror group in 2015, when it killed 18 Indian Army soldiers in Manipur.

ii.The National Investigation Agency had announced a reward of ₹10 lakhs on Niki Sumi, the head of NSCN (K).

iii.The NSCN (K) operates to establish a sovereign state with all Naga inhabited areas in India & Myanmar under one administrative setup.

Note – Days before, in September 2021, the Central Government signed a tripartite Karbi Anglong Agreement/Memorandum of Settlement with Assam’s ‘Karbi’ ethinic group to fulfill all their needs.

About Nagaland:
Nagaland attained statehood in December 1963
Mount Saramati is the highest peak in Nagaland
In the Parliament, Nagaland is represented with 1 Lok Sabha and 1 Rajya Sabha seats