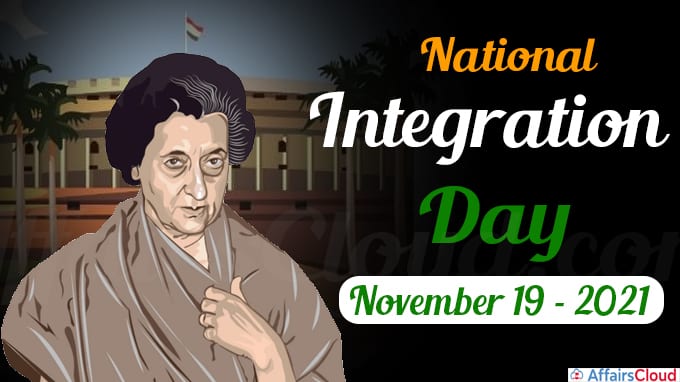 i.It is celebrated in Schools, colleges, and universities across India to remember Indira Gandhi’s leadership and the ways in which she changed the country.

ii.The celebration of National Integration Day  is carried out for an entire week with different themes associated with each following day.

i.Indira Gandhi (Indira Priyadarshini Gandhi Nehru), the first woman Prime Minister of India, was born on 19th of November  1917 in Allahabad. She was the daughter of the first Indian PM Pandit Jawaharlal Nehru.

ii.Political career- She  became a Cabinet member under Lal Bahadur Shastri’s govt. and served as the Minister for Information and Broadcasting in 1964, later in 1966 she became the Prime Minister of India.

Award– She was awarded with India’s Highest award, Bharat Ratna in 1971.

Popular Initiatives during her tenure:

Nationalization of Banks- Indira Gandhi created 14 nationalized banks in 1969 to solve the then problems that plagued the public sector banks.