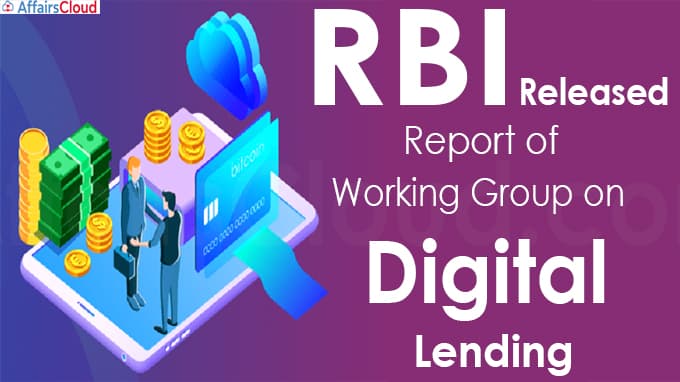 The Working Group (WG) on Digital Lending including Lending through Online Platforms and Mobile Apps, which was constituted by the Reserve Bank of India (RBI), has submitted its report in November 2021.

i.Density of DLAs and illegal players:

As per the findings of the WG, there were ~1,100 lending apps available for Indian Android users across ~81 application stores (from January 01 to February 28, 2021).

ii.Complaints against DLAs – Sachet, a portal established by RBI under State Level Coordination Committee (SLCC) mechanism for registering complaints by the public against digital lending apps has received around 2562 complaints from January 2020 to March 2021.

Key Recommendations of the WG:

The WG suggested measures on a near to medium term basis, which can be implemented in a period of up to one year to over one year.

i.In the near term, the WG suggested setting up a nodal agency in consultation with stakeholders to verify the technological credentials of the Digital Lending Apps ( DLAs) of the balance sheet lenders and Lending Service Providers(LSPs) operating in the digital lending ecosystem.

ii.The nodal agency should also maintain a public register of the verified apps on its website.

iii.Recommended to set up a Self-Regulatory Organisation (SRO) covering the participants in the digital lending ecosystem to maintain a ‘negative list’ of lending service providers.

i.Suggested development of certain baseline technology standards and compliance with those standards as a pre-condition for offering digital lending solutions.

ii.Data should be stored in servers located in India.

i.Recommended restricting balance sheet lending through DLAs to entities regulated and authorised by RBI or entities registered under any other law for specifically undertaking lending business.

iii.Algorithmic features used in digital lending to be documented to ensure necessary transparency.

v.Data collection with the prior and explicit consent of borrowers with verifiable audit trails.

vi.To form a standardised code of conduct (for recovery) to be framed by the proposed SRO in consultation with RBI.

vii.Use of unsolicited commercial communications for digital loans to be governed by a Code of Conduct to be put in place by the proposed SRO.  Click here to know more

i.Background: On April 15, 2021, RBI formed the RRA 2.0 to review the regulatory instructions, removing redundant and duplicate instructions, and reducing the compliance burden on Regulated Entities (REs) by streamlining its Regulations.

ii.The RRA has also constituted an Advisory Group representing the regulated entities under the chairmanship of Swaminathan J, Managing Director of State Bank of India.

iii.The RRA has been engaging in extensive consultations with both internal as well as external stakeholders, for simplification and easy implementation of the regulatory and supervisory instructions.

iv.RRA has recommended withdrawal of 150 circulars in the first tranche of recommendations.

On account of the feedback received from the Indian Banks’ Association (IBA), RBI has eased the Current Account (CA) rules for bank exposures less than Rs 5 crore and allowed borrowers to open CAs, Cash Credit (CC) and OverDraft (OD) from the banking system under certain provisions.