Serbian professional tennis player, Novak Djokovic has started his 269th week at No. 1 in the ATP Rankings 2019 and surpassed Jimmy Connors (268 weeks) of United States (US) for 4th  place in the all-time list of most weeks in top spot. 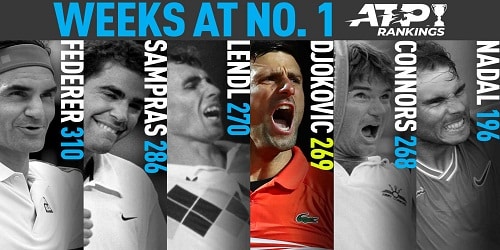 Key points:
Roger Federer of Switzerland (310 weeks) got the top spot in the latest list followed by Pete Sampras(286 weeks) of US and Ivan Lendl (270 weeks) , who played for Czechoslovakia, and the US.

The top 5 players in all-time weeks at No.1

Key points:
India’s Prajnesh Gunneswaran is among the top 100 players in the ATP rankings. He is the only Indian in this list & is currently at 82nd position. Ramkumar Ramanathan has lost three places in the rankings and has slipped to number 179.

WTA ranking:
In the WTA rankings, Ankita Raina remains to be India’s top-ranked player at 191st position and is followed by Pranjala Yadlapalli, who is placed at 338th.

Association of Tennis Professionals (ATP)
It is the principal governing body of men’s professional tennis.
ii. It was founded in September 1972.