The 3rd Global Ministerial Conference on Road Safety with theme “Achieving Global Goals 2030” was held in Stockholm, Sweden on 19–20 February 2020. It was hosted by Government of Sweden in collaboration with World Health Organization (WHO). The aim of the meet was to chart future strategic directions for global road safety and to share successes and lessons from implementation of the Global Plan for the Decade of Action for Road Safety 2011–2020. It should be noted that United Nations (UN) has set a goal under the UN Decade of Action of reducing road crashes by 2030. 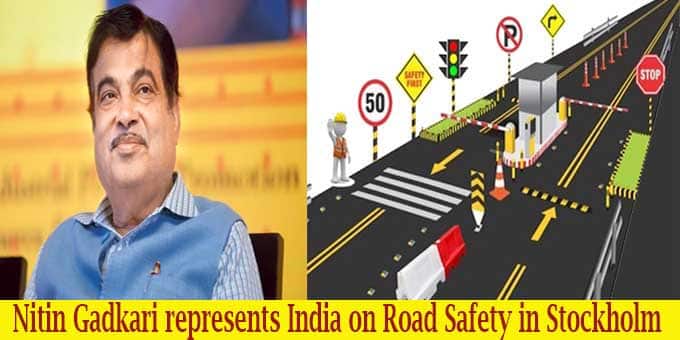 Union Minister Nitin Gadkari reaffirmed India’s commitment in reducing road accidents by 2030
India is collaborating with stakeholders and other agencies that are assisting by way of strengthening the capabilities for road safety in order to reduce road accidents by 2030. India is the largest producer of two-wheelers and one of the largest manufacturers of cars in the world. India has also the second-largest road network in the world.

-India has launched an ambitious programme for development and up-gradation of roads in the country, especially the National Highways network.

–Motor Vehicles Act has been amended for the first time comprehensively after 30 years that will lead to several reforms, ranging from road safety, citizen facilitation, transparency, and efficiency through the use of information technology.

India Needs Additional $109 Billion for Safer Roads: World Bank Report
The report, Delivering Road Safety in India, by World Bank was released during the conference. It stated India needs to invest an estimated extra $109 billion in road safety to halve its road crash fatalities. The India road safety report is part of a regional report, Road Safety in South Asia: Opportunities for Shared Regional Initiatives. This will bring economic benefits equivalent annually to 3.7% of GDP.

-India has one of the highest rates of road crashes in the world.

-In India, 34.5 percent of fatalities in 2016 resulted from crashes on the National Highways, which comprise only 1.79 percent of the country’s total road network.

–Tamil Nadu in India has already rolled out a geographic information system (GIS)-based program to map road accidents state-wide, identify the most crash-prone hot spots, and pinpoint corrective action. Through this system the response time of emergency medical services reduced from 30 to 11 minutes, at par with the world’s best performing trauma services.

Road Accidents: A great matter of concern
The number of deaths on the world’s roads remains unacceptably high, with an estimated 1.35 million people killed each year and 50 million people get injured. Road traffic crashes are the eighth leading cause of death globally for people of all ages, and the leading cause of death for children and young adults aged 5–29 years. Road traffic deaths and injuries shatter lives and throw families into poverty. On average, they cost countries 3% of their GDP.