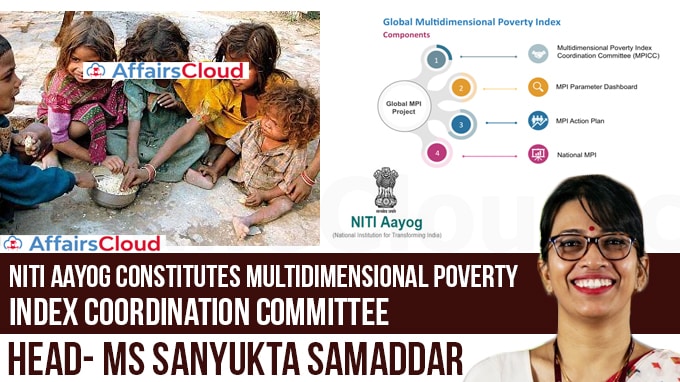 ii.These Ministries have been mapped to the ten parameters of the Global Multidimensional Poverty Index (MPI). Experts from Oxford Poverty and Human Development Initiative (OPHI) and United Nations Development Programme (UNDP) are onboard for technical expertise.

iii.The inaugural meeting of the MPICC was held on 2 September 2020. The preparations of a MPI Parameter Dashboard to rank States and UTs, and a State Reform Action Plan (SRAP) are at an advanced stage of development.

iv.Global MPI is part of Government of India’s decision to monitor the performance of the country in 29 select Global Indices. The objective of the “Global Indices to Drive Reforms and Growth (GIRG)” exercise is to fulfil the need to measure and monitor India’s performance on various important social and economic parameters and enable the utilisation of these Indices as tools for self-improvement, bring about reforms in policies, while improving last-mile implementation of government schemes.

iii.The latest NFHS 5 (2019/2020) has been passed due to Pandemic. India is set to see remarkable national improvement in the survey brought about by focused schemes and interventions especially in sanitation, cooking fuel, housing, drinking water and electricity.

ii.It utilises the NFHS, which is conducted under the Ministry of Health and Family Welfare (MoHFW) and International Institute for Population Sciences (IIPS).

ii.It was first developed in 2010 by OPHI and UNDP for UNDP’s Human Development Reports.

iii.The Global MPI reports are released at the High-Level Political Forum (HLPF) on Sustainable Development of the United Nations in July, every year.