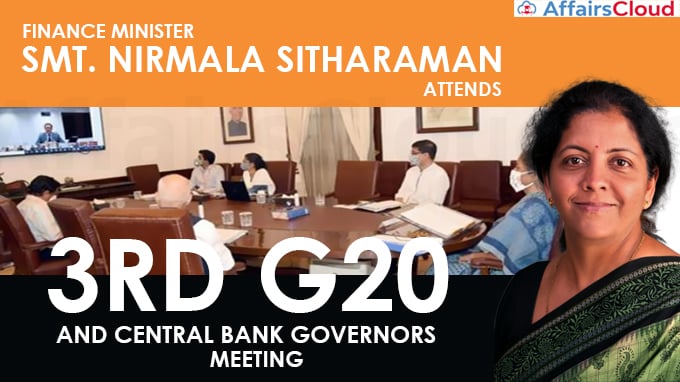 As a part of the Finance Track for the G20 (Group of Twenty) Leaders Summit 2020, the 4th G20 Finance Ministers and Central Bank Governors (FMCBG) meeting was held virtually on October 14, 2020. It was organized under the Saudi Arabian Presidency where Indian side was represented by Union Minister for Finance & Corporate Affairs Smt. Nirmala Sitharaman. The meeting was co-chaired by Mohammed Al-Jadaan, Saudi Arabia’s Minister of Finance, and Ahmed Al-Kholifey, governor of the Saudi Arabian Monetary Authority.

Key Outcome: Extension of DSSI by 6 Months till June 2021

During this meeting, the G20 Finance Ministers and Central Bank Governors agreed to extend the Debt Service Suspension Initiative (DSSI) by 6 months i.e. till June 2021 to ease liquidity pressures. It was initially in force till December 2020.