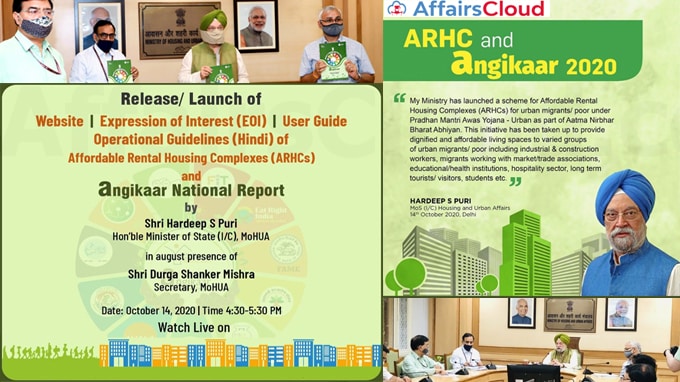 On October 14, 2020, a webinar was conducted at the launch of Affordable Rental Housing Complex (ARHC) portal (http://arhc.mohua.gov.in/) and for the releasing of guidelines and guidebook, from New Delhi which was addressed by Union Minister of State (MoS)- Independent Charge (I/C) Hardeep Singh Puri, Ministry of Housing and Urban Affairs (MoHUA).

Launched on 29th August 2019, its objective is to build capacities to manage change by focusing on issues such as water & energy conservation, waste management, health, tree plantation, sanitation and hygiene for beneficiaries of completed houses PMAY (U).

On July 8, 2020, Union Cabinet approved the Affordable Rental Housing Complexes (ARHCs) as a sub scheme under PMAY (U) to provide ease of living to urban migrants/poor. They will be implemented through two Models:

i.On September 11, 2020, Hardeep Singh Puri launched the Climate Smart Cities Assessment Framework (CSCAF) 2.0, along with the “Streets for People Challenge” in a virtual event organised by the Smart Cities Mission from New Delhi.