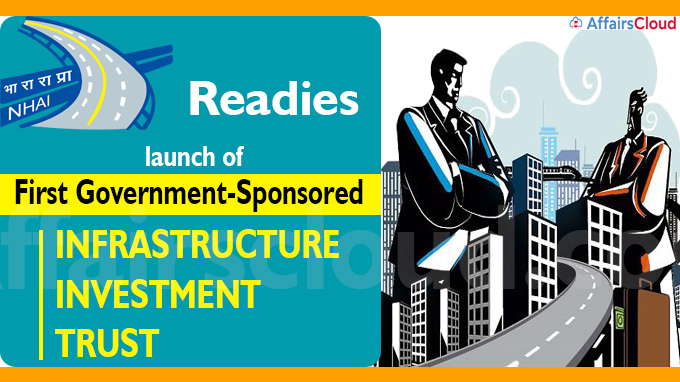 National Highways Authority of India (NHAI) is set to operationalise India’s 1st Government Sponsored Infrastructure Investment Trust (InvIT) by March, 2021. Around 5-6 Road Projects worth INR 5, 000 crore have been given in-principle approval for transfer to the InvIT.

ii.InvIT – It is an Collective Investment Scheme through which individuals & institutional investors can invest in Infrastructure projects and earn a small portion of the income as return.

The main objective behind setting up of InvIT by NHAI is to monetise its completed and operational national highways projects to mobilise additional resources through capital markets.

Assets to be transferred to InvIT:

i.The assets which are to be transferred to InvIT are 32.6 Km-long Kotha-Kata Bypass to Kurnool (Telangana), the 75 Km-long Palanpur-Abu Road in Gujarat,

The 31 Km-long Abu Road-Swaroopganj in Gujarat, the 160 Km Chittorgarh Kota & Chittorgarh Bypass in Rajasthan, and the 77 Km-long Maharashtra-Karnataka border to Belgaum.

ii.The 32.6 Km-Long Chennai Bypass may also be part of the InvIT.

ii.Based on the response from investors it would be scaled up as a funding model in future.

i.InvIT will facilitate steady inflow of private & foreign investment, which will help in steadying the capital base needed for growth of the Infrastructure sector.

ii.They are regulated by the SEBI (Securities & Exchange Board of India) (Infrastructure Investment Trusts) Regulations, 2014.

NHAI Appoints B Sriram as Chairman of NHIIMPL:

ii.He was selected by a search-cum-selection committee chaired by Deepak Parekh.

i.June 12, 2020, NHAI became the first Organisation in the Construction Sector to become fully digitalised utilising the cloud and artificial intelligence.

ii.July 3, 2020, NHAI is undertaking the establishment of India’s first government promoted InvIT to facilitate investment in the highway sector.

It is an autonomous agency of Government of India & the nodal agency of Ministry of Road Transport & Highways.
Chairman – Sukhbir Singh Sandhu
Headquarters – New Delhi