Nepal’s Prime Minister Khadga Prasad Sharma Oli was on his maiden 6 days visit to India aimed to strengthen ties by clearing the misunderstanding between both nations. Oli and NaMo discussed a range of bilateral issues. 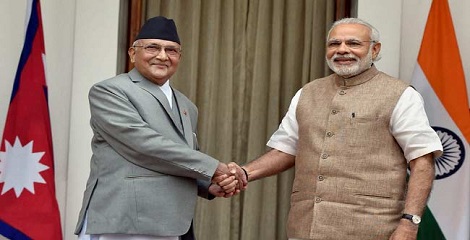 During the visit both nations has signed 7 agreements which are briefed as below:

MoU will enable speedy implementation of remaining work on 17 Roads in Package 2, 3, 4, 5 and 6 of the Terai Road Phase-I project, totalling 518 kms.

To enhance relations in the field of performing arts through exchanges of experts, exponents, dancers, scholars and intellectuals.

(ii) Rail transit facility through Singhabad (West Bengal) for Nepal’s Trade with and through Bangladesh.

The Nepal portion of the 400 KV Muzaffarpur-Dhalkebar transmission line is being implemented by GoN, worth US$ 13.5 million.

The EPG comprises 8 members with each country nominating four members – parliamentarian, lawyer, economist and civil society activist. The EPG has now been constituted. It would review bilateral relations and recommend measures to further enhance ties.

Keys:
What was the reason for misunderstanding between Indo – Nepal?
There was an agitation led by the Indian origin Madhesis against Nepal’s newly promulgated Constitution. Their main complaint was that the constitution failed to give them a greater say, including specially-designated states for them.