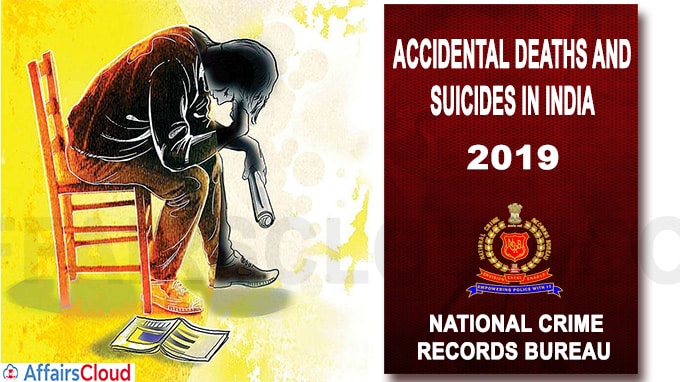 On 1st September 2020, The National Crime Records Bureau(NCRB), Ministry of Home Affairs released an annual report titled “Accidental Deaths and Suicides in India(ADSI) 2019”. This is NCRB’s 53rd edition of the series which was started in 1967.

This is the only most comprehensive data bank related to the accidental and suicidal death available with the government of India.

ii.The data of the cities with a population of 10 lakh or more are collected separately.

ii.The report classified the accidental deaths as two groups based on causes,

iv.The report also contains the details on suicide by causes like bankruptcy, marriage, relationships, failures, property disputes etc and details of professional educational and social profile of the victims.

The reason of suicides among farmers has not been published by NCRB since 2015.

i.According to the report the variation percentage of accidental deaths and suicide during 2019 over 2018 are around 2.3% and 3.4% respectively.

ii.Delhi recorded the highest number of deaths due to dangerous driving and overall road accidents in 2019.In Chennai and Bengaluru, 1,258 and 768 persons died in road accidents respectively.

ii.Around 7.7% victims of road accidents were pedestrians and motorised two wheelers are stated as the deadliest with 38%.

iii.Road traffic injuries is the 8th leading cause of death in India of which around 65% belong to the age group of 18 – 45 years.

iii.Two third of suicides in India during 2019 belongs to the category with annual income less than Rs.1 lakh.

iv.Suicides among daily wage earners was higher which contributes 23% of those who died due to suicide.

v.The majority of the victims belong to the age group of 18-45 and educated.

ii.Suicide involving persons engaged in farming sector have increased in 2019 compared to 2018.

iv.The farmers account for 7.4% of total suicides in India.

v.Maharashtra (2680) followed by Karnataka (1331), Andhra Pradesh (628) and Telangana (491) record the highest suicides in the farming sector which includes farmers and cultivators in India during 2019.

Uttar Pradesh recorded the highest road crash deaths with 15% of total deaths followed by  Maharashtra with 9.4% and Madhya Pradesh with 7.7%.

97.3% of total traffic accidents occur in the 53 mega cities of India during 2019 where Chennai accounts for 10.2% of total road accidents reported in mega cities followed by Delhi with 8.0%.

i.National Crime Record Bureau’s (NCRB) report on Crime in India for the year 2018 was released. The report finds that over 50 lakh crimes have been registered in 2018 which is 1.3% more than that of 2017.

ii.National Crime Records Bureau (NCRB) report titled ‘missing women and children in India’ states that the highest number (33,964) of women who go missing in India are from Maharashtra & the number of missing children are maximum (10, 038) in the State of Madhya Pradesh (MP) in the year 2016, 2017 & 2018.