On August 29 2017 Prime Minister Narendra Modi tribute to the legendary hockey player Major Dhyan Chand, and congratulated all sportspersons on the occasion of National Sports Day.

He also launched National Sports Talent Search Portal.It will give essential direction and support to youngsters to pursue their ambition in sports. 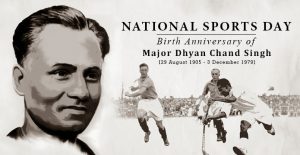 August 29 marks the birth anniversary of India’s hockey legend, Major Dhyan Chand. In order to honour him this day is celebrated as National Sports Day.

ii.He was awarded the Padma Bhushan in 1956 by the Indian government for his splendid contribution to Indian hockey.