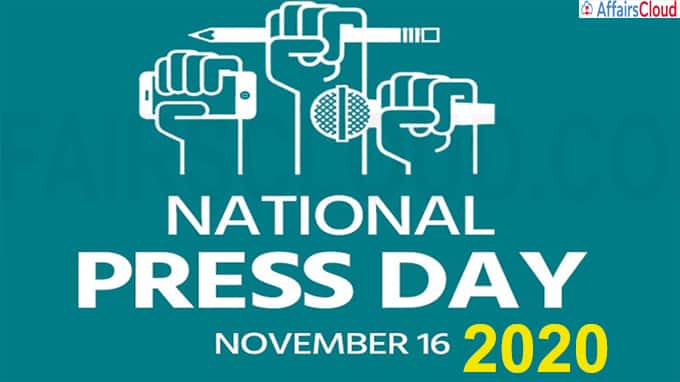 National Press Day is celebrated annually on November 16 across India to commemorate the establishment of the Press Council of India(PCI) in 1966. The day aims to raise public awareness of the role of a free, pluralistic and independent news media in the development of the democratic society. The day is the symbol of a free and responsible press in India.

Note– Media is called the fourth pillar of democracy

i.On the occasion of the National Press day a webinar is being held on the theme ‘Role of media during the COVID-19 pandemic and its impact on the media’.

ii.The webinar will be attended by participants from  several other countries

i.The Press Council of India, a statutory, adjudicating organization in India was set up by the Parliament in recommendation of The First Press Commission (1954)

ii.The self-regulatory watchdog of the press, for the press and by the press operates under the  Press Council Act of 1978.

Objective- To preserve the freedom of the press and maintain, and improve the standards of newspapers and news agencies in India.

i.The chairman of the commission will be a retired Supreme Court judge.

ii.It has additionally 28 members, of which 20 are members of media, nominated by the newspapers, television channels and other media outlets operating in India

ii.Of the 28 member council, 5 are members of the lower house (Lok Sabha) and upper house (Rajya Sabha) of the Indian parliament and 3 represents the  culture literary and legal field as nominees of Sahitya Academy, University Grant Commission and Bar Council of India.