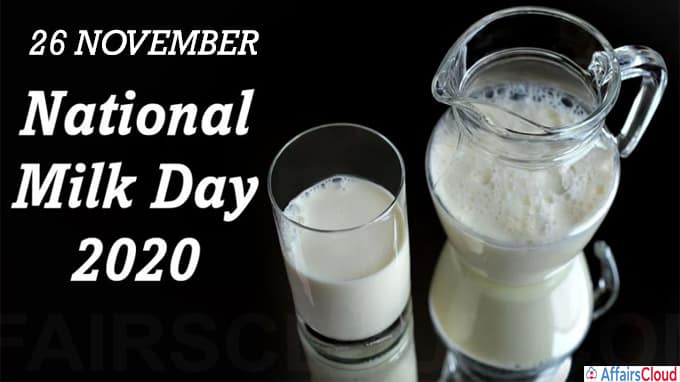 National Milk Day is annually celebrated across India on 26th November to celebrate the importance of milk in the life of humans. The day honours the birth anniversary of padma awardee Dr Verghese Kurien, who is known as the Milkman of India and Father of India’s White Revolution.

i.Dr Verghese Kurien who played a major role in enabling India to have its own milk production centres and the architect of the Operation Flood, which enabled India to become the largest producer of milk.

ii.He was the Chairman and Founder of Amul who was named as the Chairman of National Dairy Development Board (NDDB) by former Prime Minister Lal Bahadur Shastri.

iii.He also contributed to the making of Amul girl ad campaign, the longest running campaigns for more than 10 years.

v.He has also received the Ramon Magsaysay Award in 1963 for his creative coordination of Government and Private enterprise to improve food and sanitation in India.

i.The Operation Flood was launched in 1970 by India’s National Dairy Development Board (NDDB).

ii.It was the world’s biggest dairy development programme which boosted the milk production of India.

i.As a part of the National Milk Day, NDDB awarded certificates and awards to 86 milk producers, 19 dairy cooperatives and 8 milk producer companies across 22 states for their efforts towards increasing the digital bill payments.