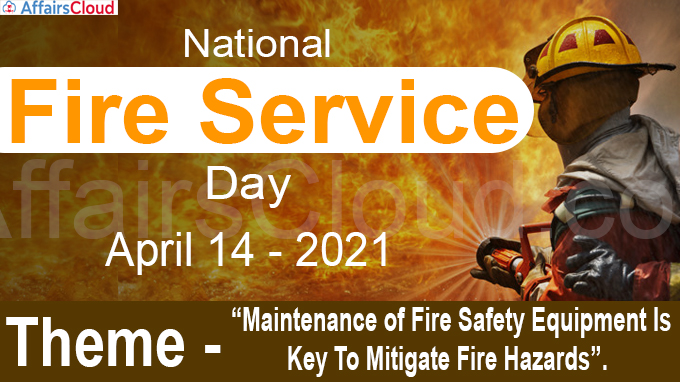 The theme of National Fire Service Day 2021 is “Maintenance of Fire Safety Equipment Is Key To Mitigate Fire Hazards”.

i.On 14th April 1944, the freighter SS Fort Stikine at the Victoria Dock of Bombay port(Presently Mumbai) carrying a cargo of cotton bales, gold, and ammunition including around 1,400 tons of explosives caught on fire.

iv.The explosion broke the ship into 2 halves and damaged the ships which were present in the vicinity.

i.The Fire Service Week or Fire Prevention Week is annually observed across India under the guidance of Fire Advise, Ministry of Home Affairs from 14th April to 20th April.

ii.The Fire Service Week has been propagated by the National Safety Council Since 1999.

iii.The observance of the week acts as a reminder to all the sections of the society to review their fire safety needs and to develop a suitable strategy for the prevention of fire.