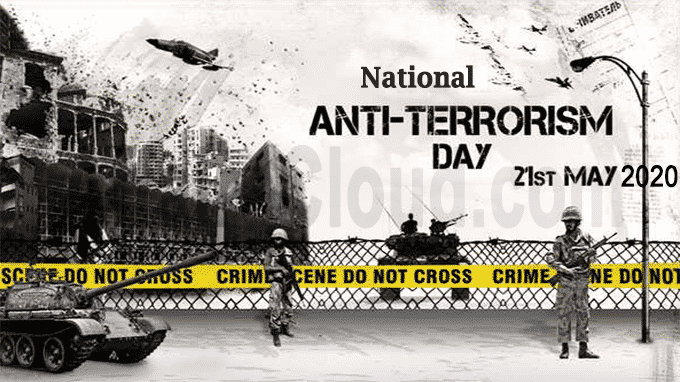 National Anti Terrorism Day is observed every year on May 21 in order to raise awareness amongst people that terrorism has no religion, also to spread the message of peace, harmony, and brotherhood. The day commemorates the death anniversary of former India’s youngest Prime Minister (PM) Rajiv Gandhi. He served the nation from 1984 to 1989.

ii.On this day, we also remember our soldiers, who sacrificed their lives for us. Hence, we honour them by paying tribute to all of them.

iii.History of the day: On May 21, 1991, Rajiv Gandhi, India’s former Prime Minister, was assassinated by a human bomb in  Sriperumbudur, Tamil Nadu. He was visiting Tamil Nadu to campaign for National elections in the state, as the President of Congress Party.

iv.He was appointed as the sixth Prime Minister (PM) of India in 1984 after the assassination of his mother and also India’s first lady Prime Minister Mrs Indira Gandhi.

v.National-Anti Terrorism Day was announced by former PM Vishwanath Pratap Singh after the assassination of Rajiv Gandhi, with the aim to highlight the importance of fighting with the activities of terrorism.

vi.National Anti-Terrorism Day Pledge: On this day, all the offices of Government of India (GOI), public sector and other public institutions take a pledge to put in every effort to win battle against terrorism and eradicate it from the society.