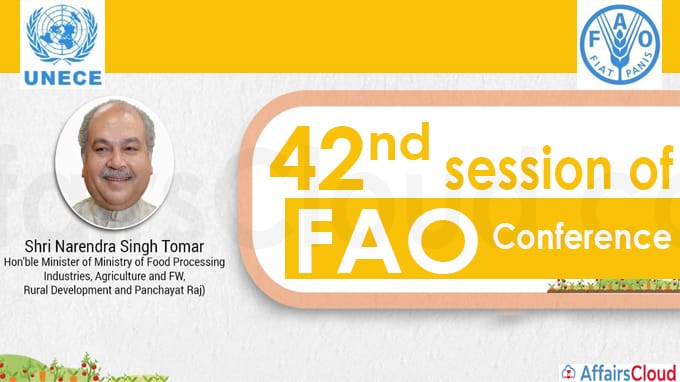 i.All the 193 members of the FAO plus the European Union endorsed the new Strategic Framework 2022-2031 which will support the 2030 Agenda for Sustainable Development.

ii.The conference elected Ambassador Hans Hoogeveen, the Permanent Representative of the Netherlands to UN Organizations in Rome, as the new Independent Chairperson of the Council (ICC) for the next two years (2021-23).

Key Points from the India’s address

ii.It also thanked the FAO for endorsing its proposal to declare 2023 as the International Year of Millets.

iii.Also highlighted that FAO endorsed India’s proposal for an International Year of Pulses which was celebrated in 2016.

Initiatives in Agriculture sector of India

India highlighted its record production of 305 Million Tons of Food Grains even during the pandemic.

i.KISAN RAIL ,a train with refrigeration facility was introduced in India to transport essential commodities such as perishable horticulture produce, milk and dairy produce and others.

ii.He also highlighted the ‘Pradhan Mantri Garib Kalyan Package’ scheme which provided free food grains to 810 million beneficiaries and it has been extended till November, 2021.

iii.Around INR 137000 crore has been sent to the bank accounts of over 100 million farmers under the ‘PM Kisan’ Scheme for providing income support to farmers.

Apart from promoting Organic farming, India has launched several projects under the National Mission on Sustainable Agriculture to develop, demonstrate and spread techniques to make agriculture resilient to impacts of climate change.

The 35th  Session of the FAO Regional Conference for Asia and the Pacific (APRC 35) hosted by Bhutan at its capital Thimphu was held virtually from 1-4 September 2020. The conference was chaired by Bhutan’s Secretary of the agriculture ministry, Rinzin Dorji.

About Food and Agriculture Organization (FAO)