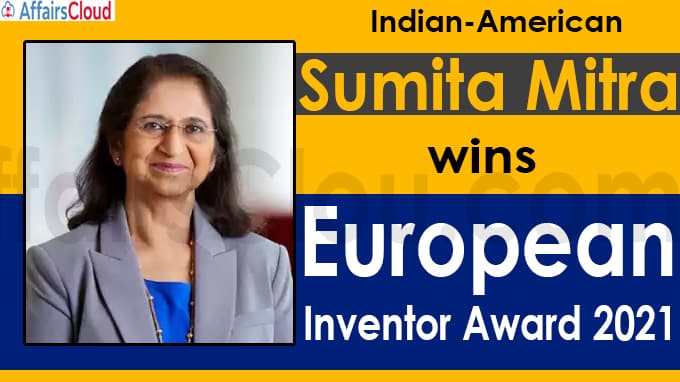 i.She was the 1st one to have successfully integrated nanotechnology into dental materials, and has invented stronger, durable & aesthetically pleasing dental fillings.

ii.The filling is developed by Mitra along with her team using a technique for creating linked clusters of nanoparticles or ‘nanoclusters’.

iii.Her invention is remaining successful for around 20 years, after the commercialisation of the dental filling, it has been used in more than 1 billion tooth restorations.

iv.She was elected to the National Academy of Engineering in 2021 for her invention in the dental field and was also inducted in the US National Inventor Hall of Fame.

i.It is the Europe’s most prestigious award, was launched by EPO in 2006 and presented annually by it to honour individual and team inventors from Europe and beyond, who have made an exceptional contribution to society, technological progress and economic growth through their pioneering inventions.

ii.Winners of the award are presented with a trophy in the shape of a sail. As one of the world’s oldest inventions, the sail is a reminder of the ingenuity of humankind.

Y Nuklu Phom, a church worker from Nagaland, won the Whitley Award 2021 for his efforts toward creating “Biodiversity Peace Corridor”, a network of community-owned forests in Nagaland and protecting the Amur Falcon. He is the only Indian to win the prestigious award.The Whitley Award is also known as the ‘Green Oscar’.