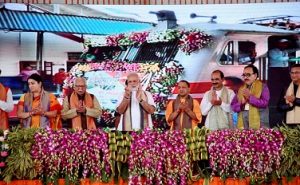 Mr.Modi flaged off Mahamana Express between Varanasi and Vadodara:
i.Mr.Modi flagged off the Vadodara-Varanasi weekly express remotely through a video link.
iiThis express has new features like LED screens and environment friendly toilets.In sleeper coaches, the berths have reading lights.
iii.The train has been named after freedom fighter Mr.Madan Mohan Malviya.This train connects Varanasi in Uttar Pradesh with Surat and Vadodara in Gujarat.