On 29th august,2017 Prime Minister Narendra Modi visited Rajasthan to inaugurate few highway projects and to dedicate some to our nation along with road  transport and highways minister Nithin Gadkari. He informed that his government is setting in a culture of completion of projects unlike previous governments. The assembly polls in Rajasthan is going to take place next year. PM Modi will also visit Pratap Gaurav Kendra which exhibits the valour and achievements of Maharana Pratap and pay his homage to the famous King of Mewar. 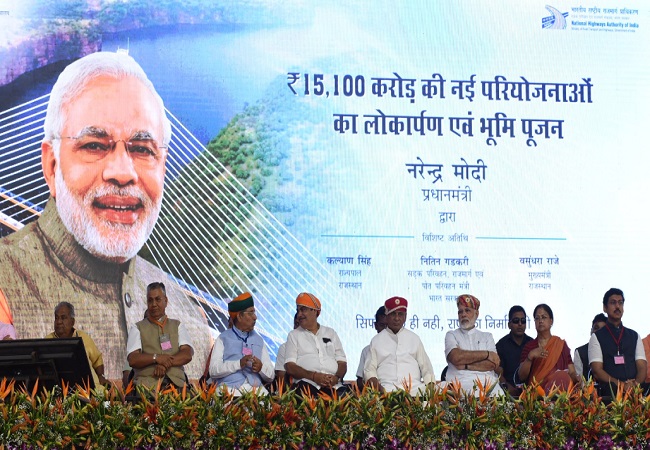 Highlights of his visit :

2. He dedicated 11 national highways to the nation. These highways cover a total length of 873 kms and inaugurated a suspension bridge built across the Chambal river at Kota, making it the first 6-lane cable suspended bridge in the Rajasthan. The bridge, 1.4 km in length, is constructed at a cost of Rs 278 crore at Kota. PM added that he is happy that his government is able to complete the dream project of Atal Bihari Vaipaiyee ,” Golden Quadrilateral”.

5. PM Modi will perform bhoomi pujan of 6 laning of Chittorgarh to Udaipur section of NH-76 at a total capital cost of around Rs 1,220 crore and 6 laning of the new Udaipur bypass on NH-8.

6. The completed projects include 11 districts of Rajasthan: Kota, Rajsamand, Udaipur, Bhilwara, Pali, Nagaur, Barmer, Sikar, Churu, Jodhpur and Jaisalmer whereas, the awarded projects for which the PM will perform bhoomi pujan are expected to benefit people in Jodhpur, Pali, Ajmer, Bhilwara, Chittorgarh, Udaipur and Dungarpur.

These highways will help farmers, boost tourism and open up economic opportunities for the local people. They would not only help link Rajasthan more efficiently but also be gateways to progress.

Former Rajasthan Chief Minister and senior Congressman Ashok Gehlot took to social media to hit out at PM Modi for not visiting Rajasthan during the recent floods to take stock of the situation. Gehlot also claimed that the projects launched today by PM Modi were started by the previous Congress regime.