On May 4, 2020 Prime Minister(PM) Narendra Modi participates in the online summit of Non-Aligned Movement(NAM) Contact Group on the theme “United against COVID-19” hosted by the current Chairman of NAM, President of Republic of Azerbaijan HE Ilham Aliyev through video conference to discuss the response to the COVID-19 pandemic crisis. It also observes the International Day of Multilateralism and Diplomacy for Peace(April 24). 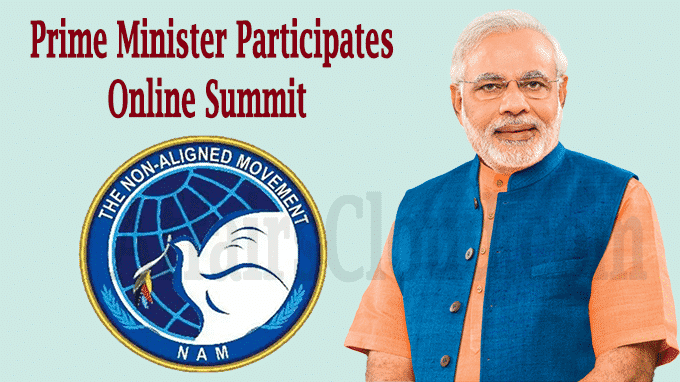 Objective of the Summit

To promote international solidarity in the fight against the COVID-19 pandemic and to mobilise efforts of states and international organisations to address the pandemic.

Major Highlights of the meeting

ii.Following the summit, the leaders adopted a Declaration underlining the importance of international solidarity in the fight against COVID-19.

iii.Leaders announced the creation of a ‘Task Force’ to identify needs and requirements of member states through the establishment of a common database reflecting their basic medical, social and humanitarian needs in the fight against COVID-19.

PM’s important intervention in the meeting

i.Highlighted India’s constructive role in dealing with the COVID-19 pandemic & India’s organising the “disaster management drills” while other countries are organising military drills.

ii.Urged a reform in the international organisations post COVID-19 consisting of a new template of globalisation as the pandemic has shown the limitations of the existing international system.

iii.Develop a platform for NAM countries to pool their “experiences, best practices, crisis-management protocols, research, and resources, ensure equitable, affordable and timely access to health products and technologies for all & focus to be on human welfare and not just on economic growth.

Over 30 other Heads of State and Government and other leaders, including from member States in Asia, Africa, Latin America and the Caribbean, and Europe.

i.It was found in 1961 by initiatives of Gamal Abdel Nasser of Egypt, Kwame Nkrumah of Ghana, Jawaharlal Nehru of India, Ahmed Sukarno of Indonesia and Josip Broz Tito of Yugoslavia & has 120 member states, 17 Observer Countries and 10 Observer organizations.

ii.The basic concept for the group originated in 1955 during the Bandung Conference held in Indonesia, “Ten Principles of Bandung”, was proclaimed in the conference which was later adopted as the main goals and objectives of the policy of NAM

To support self-determination, national independence, the sovereignty and territorial integrity of States, the struggle against colonialism, neocolonialism, racism, foreign occupation and domination, restructuring of the international economic system & international cooperation.

It has no permanent body and headquarters. The Coordinating Bureau, led by the Permanent Representative of the Chairman-in-Office to the United Nations. is the main body of the NAM, which operates on a permanent basis.