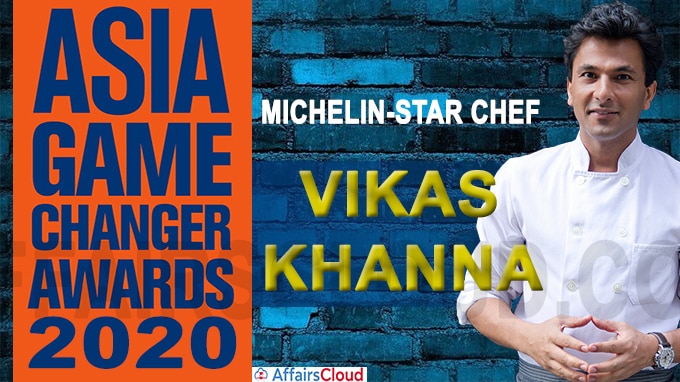 On 16th August 2020, The Michelin Star Chef Vikas Khanna received the 2020 Asia Game Changer Award from Asia Society, a United States based non-profit organisation for feeding millions of people across India amid the ongoing COVID-19 pandemic, by coordinating a food distribution drive from Manhattan.

He is the only Indian among the six awardees who were recognised by the Asia Society.

ii.He partnered with National Disaster Relief Force of India for logistics and on ground support.

iii.Various organisations and tech firms aided him and offered industrial kitchen space in Mumbai to support this movement.

iv.He has also provided over 500000 slippers, 3.5 sanitary pads, 2 million masks and other basic needs in more than 100 cities across India.

i.The Asia Game Changer Award was launched by the Asia Society in 2014 to identify and honour the individuals for their contribution to the future of Asia.

ii.The awards will be presented to the honourees over a virtual ceremony which will be held in October 2020 as a global virtual event hosted from New York.

iii.The virtual ceremony will feature the message of Andrew Cuomo, Governor of New York, performance of cellist Yo-Yo Ma and a feature to honour the frontliners of COVID-19 pandemic in US and Asia

i.Yo-Yo Ma –  American cellist is honoured for his lifetime contribution to music and for his initiative #songsofcomfort amid pandemic.

ii.Naomi Osaka – Japanese-Haitian Tennis Champion is honoured for her using her global platform to call for racial justice and social change.

iv.Miky Lee –  Producer of Oscar winning film “Parasite” is honoured for highlighting the economic inequality and for enhancing the profile of Asians on screen.