On December 26, 2019 the Ministry of External Affairs (MEA)has included Madagascar and Comoros in the Indian Ocean Region (IOR) Division. The IOR division looks after India’s maritime neighbours such as Sri Lanka, Maldives, Mauritius and the Seychelles. Previously these two nations were looked after by East and South Africa Division of the MEA. 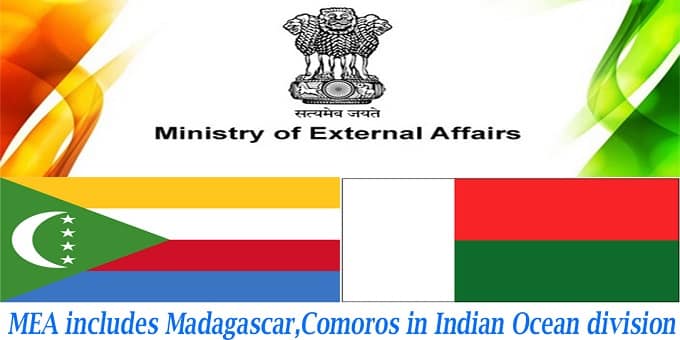 i.The inclusion of these 2 island nations reflects the growing strategic importance of the Indian Ocean islands within the framework of Indo-Pacific.

ii.Madagascar and Comoros are also the members of the Indian Ocean Rim Association (IORA) and International Solar Alliance(ISA). Comoros is a member of Arab League and the Organization of Islamic Countries (OIC) and is situated on the northern tip of the strategic Mozambique Channel in the Western Indian Ocean.

iii.Indian ocean commission members: Seychelles, Mauritius, Madagascar, Comoros along with Reunion islands (French territory) are known as Vanilla Islands and are members of the Indian Ocean Commission. Among them, Madagascar is the largest island with a population of 26 million and an area of larger than France.