On March 4, 2020, the Ministry of Corporate Affairs (MCA) has introduced a scheme namely “LLP Settlement Scheme, 2020” for limited liability partnership (LLPs) by allowing a one-time condonation of delay in filing statutorily required documents with the Registrar of Office (ROC) by exercising of its power u/s 460 of the Companies Act, 2013.

In simplified language, it means the scheme is providing a three-month window from 16th March, 2020 to 13th June, 2020 to LLPs for completing overdue or delayed filings of four forms which were due for filing till 31st October, 2019. Also, the additional fee on these forms is reduced to Rs. 10 from Rs. 100 per day of delay with upper cap of Rs. 5,000 per form. The four forms are: 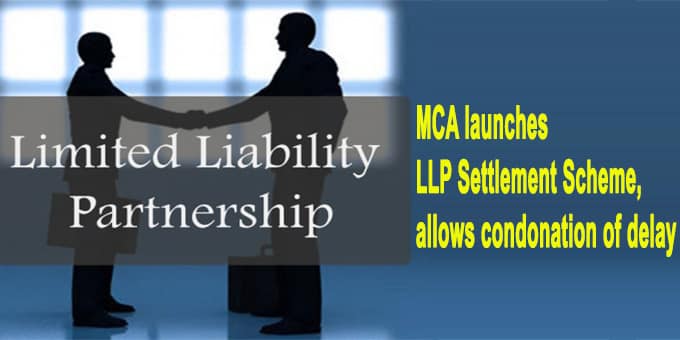 Reason behind the launch of LLP Settlement Scheme, 2020:
Due to applicability of additional fee on late filing, a large number of LLPs have remained non-compliant, mainly on account of their inability to pay late fees for the cumulative period of delay. This move is one time opportunity for LLPs to ensure that they make necessary compliance in defaulting LLPs.

Points to be noted

-It should be noted that the Scheme will be applicable to LLP, which is registered under the Limited Liability Partnership Act, 2008 which has made a default in filing of documents on the due date(s) specified under the LLP Act, 2008(i.e. on or before October 31, 2019) & rules made there in.

-The defaulting LLPs, which have filed their pending documents till 13th June 2020 shall not be subjected to prosecution by ROC for such defaults.

-If LLP does not file pending forms till 13th June 2020 then the additional fees would be back to Rs. 100 and it will have no upper cap.