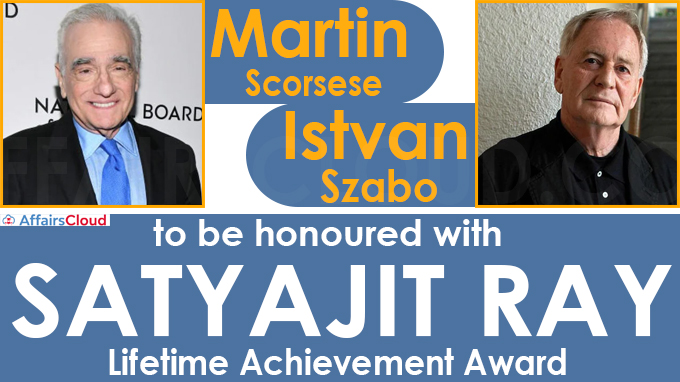 American Director Martin Scorsese & Hungarian Director Istvan Szabo will be honoured with the first-ever Satyajit Ray Lifetime Achievement Award at the 52nd International Film Festival of India (IFFI 2021) which is to be held from 20th to 28th November 2021 in Goa.

The BRICS Countries are the focus countries of the 52nd IFFI.

ii.He won the Oscar for Directing in 2007 for the film “The Departed”.

ii.He was the first director from Hungary to win the Oscar for Best Foreign Language film.

He won the Oscar for Best Foreign Language film in 1981 for the film “Mephisto”.

The year 2021 marks the birth centenary of Satyajit Ray, the maestro of Indian Cinema.

Recognising the legacy of Satyajit Ray, the “Satyajit Ray Lifetime Achievement Award for Excellence in Cinema” has been instituted in 2021, which will be annually given at the IFFI starting from the 52nd IFFI (2021).

Jury for the International Competition for 52nd IFFI:

ii.It is recognized by the International Federation of Film Producers Associations (FIAPF).

Union Minister Anurag Thakur has also announced that for the first time, the films from all 5 BRICS nations (Brazil, Russia, South Africa, China and India) will be showcased through the BRICS Film Festival along with the IFFI 2021.

Union Minister Anurag Thakur also announced that for the first time the IFFI has invited major Over the Top (OTT) platforms such as Netflix, Amazon Prime, Zee5, Voot, SonyLiv to participate in the festival through Masterclasses, content launches and previews, curated film package screenings, and various other on-ground and virtual events.